Super Tuesday Open Thread...to be updated throughout the evening

Well, I went and cast my (secret) ballot a couple of hours ago. It was my first vote from this abode, so I went to a new polling place - which is, ironically farther from my current home than the polling place on Hospital Hill where I cast my first ballot in KC.

I asked the poll workers if the turnout was higher than expected, and she gestured to all of the signatures on the pre-printed sign-in sheets provided to the polling stations by the election board. Missouri is officially non-partisan, you request a party's ballot when you present yourself at the polling station. I asked the person who handled my section of the alphabet how Democrats were doing in relation to Republicans, and when I said "two to one?" she gave me a thumbs up and said "way higher," then told me that people were requesting Democratic ballots in that precinct at a rate of four or five to one.

While at the polling place, my husband and I had the privilege of helping a woman cast her first ballot in her entire 65 years on this planet, and she was very vocally supporting Hillary. She wanted to make sure her ballot was properly marked and fed into the scanner and registered.

Then we hopped on the bus to return home - and I was confronted with something I thought I had already successfully dealt with - these gawd-awful voter disenfranchisement signs: 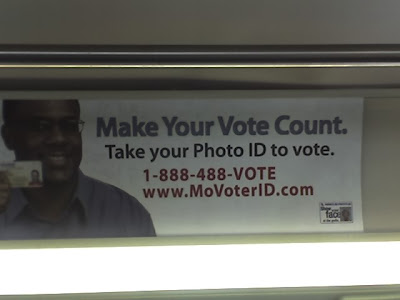 Now - I have not seen one of these on a Max, a 57 or a 51 since I called and complained last summer. I also have an archived email where I corresponded with the mayors wife about this issue. (I knew that Gloria was in over her head when she responded that the placement of the signs was strange, since the KCATA wouldn't sell them advertising for the mayoral campaign - not realizing the difference between political advertising and public service announcements.)

But I digress - today, there it was on a 35, big as life. The 35 runs through the east side of Kansas City - and like it or not, Kansas City is segregated. Very few white people live east of Troost. That is reality in Kansas City. Another bit of uncomfortable reality: we are a city with a horrible track record where racial issues are concerned.

So what is up with these voter-disenfranchisement signs? The law that the "public service announcement" promotes was struck down by Cole County Judge Richard Callahan in September of 2006, and upheld by the state Supreme Court in October, in a six-to-Limbaugh decision.

I hate that the current incarnation of the GOP makes me think like a conspiracy theorist, but when a pattern is established, well, let me dust off an old medical truism that I used to tell earnest, eager, young residents when they would bring specimens for exotic tests into my lab...if you hear hoofbeats, think horses, not zebras.

If you live in the KC area, by all means, please call the KCATA at 816-221-0660 and tell them you are aware of the civil rights violations rolling through the black community on a daily basis.
...
UPDATE I - by Blue Girl

Missouri's polls closed less than a half hour ago, but on the Democratic side, CNN is reporting that Hillary Clinton leads Barack Obama by a wide margin - 58% to 24%. On the Republican side, Huckabee is leading McCain by a five-point margin - 33% to 28%.

Obama is the projected winner in Georgia and Illinois, while Oklahoma has been called for Hillary.

On the Republican side, Connecticut and Illinois have broken for McCain, while Romney squeaked out a victory in Massachusetts, where he used to be the governor.

More Olbermann, less everyone else, please.

Brokaw opines that nothing will be decided tonight. Clinton beating Obama in Massachucetts is a huge deal. I suspect that no one has bothered to notice that the Kennedy mystique doesn't quite deliver what it used to.

Romney, who addressed the state GOP convention in person Tuesday, comfortably led the first ballot at the convention, leading to a three-way second ballot contest between the three contenders.

Marc Ambinder of The Atlantic reported Tuesday that, after the first ballot, McCain’s campaign called his supporters there and urged them to vote in favor of Huckabee.

“Unfortunately, this is what Senator McCain’s inside Washington ways look like: he cut a backroom deal with the tax-and-spend candidate he thought could best stop Governor Romney’s campaign of conservative change,” Beth Myers, Romney’s campaign manager, said in a statement

Amen Pale Rider! The Kennedy magic just didn't cast the spell they were hoping for in Massachusetts, did it? Mass broke for Hillary - decisively - Clinton 58%, Obama 39%.

Senator Clinton carried New York with 60%, Obama carried a solid 37%. Across the river in New Jersey, Clinton took the lead, 55% to 43%. She also carried Arkansas, where she was the First Lady of the state for many years 72% to 24%.

Tennessee surprised me a little bit - I thought it would be closer - but Hillary took the state standing up - 61% to 31%.

On the Republican side, McCain took New York, Delaware, and New Jersey.

Huckabee took his home state of Arkansas and, as mentioned earlier, West Virginia.

Romney, apparently is going to be the Republican nominee for President of Massachusetts. Or Utah.

She's winning big states, he's winning what's left. If she wins California, that should swing the momentum back to her. I just heard someone on NBC say roughly the same thing--delegates matter, not states. I think it was Russert. I am concerned that if I find myself agreeing with Russert that my own head will explode...

McCain - Mr. I-won't-take-public-funds-after-saying-I-would had over 118,000 Republicans--in his home state--turn our and vote AGAINST him, most of them for Mitt Romney.

11:55PM Eastern - Obama is talking about a chorus that cannot be ignored...and that's fine. His speech, a little better than hers.

Romney destroys McCain in Colorado--That's Dobson/religious wingnut country. That's another big "wow" because the Limbaugh/Dobson opposition to McCain has a lot of bite to it.
Posted by Blue Girl, Red State at 2/05/2008 03:14:00 PM