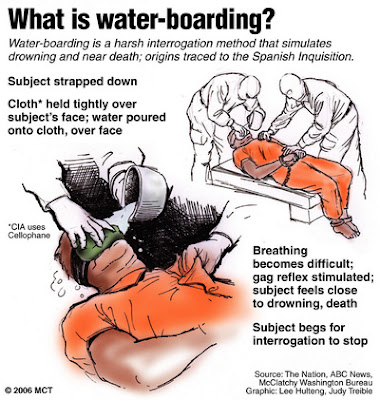 CIA Director Michael 'shame of the Air Force' Hayden admitted Tuesday the the CIA has broken federal and international laws and used torture, in the form of waterboarding, to interrogate three suspected terrorists, but he quickly added that the technique has not been used in five years.

And what reasoning does he use to justify torture?

They were a bunch of chickenshits, pissing down their legs in fear.

Torture was employed at secret CIA detention facilities (the so-called 'Black Sites') at a time when little was known about al Qaeda, and they feared more attacks like those of September 11, 2001 were imminent. He seems to waive it away with a simple "those two realities have changed."

"General Hayden's acknowledgment that the CIA subjected three detainees to waterboarding is an explicit admission of criminal activity," said Joanne Mariner, terrorism and counterterrorism director for human Rights Watch. "Those who authorized these crimes have to be held accountable."

Hayden stressed that waterboarding hasn't been used in nearly five years, and that other so-called "enhanced" techniques had been used on "fewer than one-third" of the "fewer than 100" people the CIA has held since 9-11. He said that although the techniques went beyond what was allowed in the Army field manual, the attorney general had certified them as legal for the CIA. The use of waterboarding would require the agreement of the president and attorney general, he said.

His comments came during a hearing before the Senate Intelligence Committee on the risk that terrorist groups pose in which he said the U.S. faced dangers from al Qaida, groups that get money or training from terrorist organizations and what officials call "homegrown extremists" in the United States.

Director of National Intelligence Michael McConnell, who also testified, said that U.S. cells hadn't been very effective so far but that they could use information on the Internet to become more deadly.

When the current occupant authorized waterboarding and other "enhanced interrogation techniques" (call them what they are: torture) he sold America's soul, and illustrated Ben Franklin's observation that those who would trade away their freedoms for a false sense of security deserve neither.

It has long since been classified as such, and Congress is considering taking up legislation banning the CIA from using it. It is already prohibited under the Army Field Manual.

I am the ultimate Cold War brat. I have some pretty set-in-stone ideas and ideals. One of them is that we simply don't do things like that. There truly are prices that are simply too high to pay. Abdicating the moral high ground out of fear is one of them.

I realize full measure that "American Exceptionalism" was always a myth - but at least we used to pretend to behave in an exceptional manner.
Posted by Blue Girl, Red State at 2/06/2008 10:09:00 AM