Reporting from the Rally at Penn Valley

Well, I just got back from the Rally at , where the Peace Caravan departed from the campus to protest at the gates of the munitions plant. (I’m not participating in that phase of today’s protests – I see the need for a strong military and advanced weaponry – I also firmly believe that both are being misused in . Which is why I was out today to protest the war in and document the rally here.)

There were many good speakers and some great music. I certainly do not mean to slight anyone if I don’t include your favorite speaker in the *photo essay* that follows. It is entirely possible that I was unable to get photos of your favorite speaker or musician because I ran into a bit of a memory problem while I was photographing, and nothing was on zoom, so some pictures aren't usable. (I caught Zoe with the camera recently, so I probably need to cut my losses and just restore the factory settings and start over…)

Anyway - without further delay, or comment on my part, here are the pics from the rally. Enjoy. 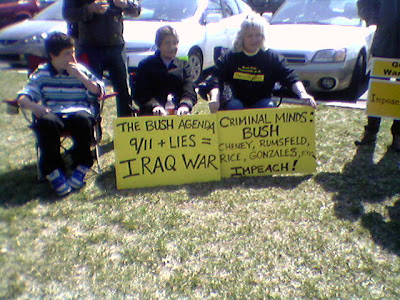 Politicians, take note -
You will never get up early enough in the morning to put
anything over on these ladies.

But don't take my word for it.
Ask our kids. 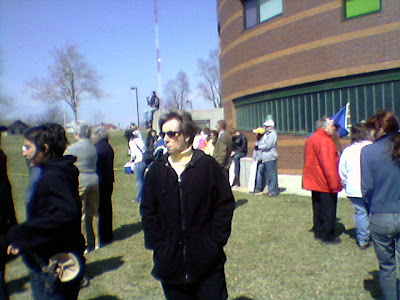 It was certainly a ruly mob... 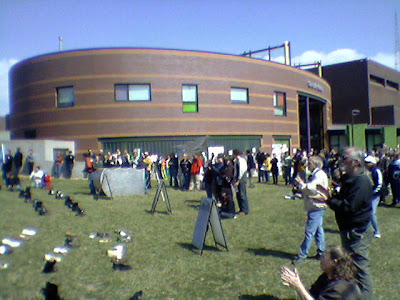 My yes - just look at all those dirty hippies
out protesting the war and demoralizing the troops...

Oh wait - these are all folks who look like they might live next door...
Why...Is that Dave and Janet from the next block over?

And what about those protesters who have kids over there?
What about the gold-star protesters?
(Nodding reverentially to the Farnan family of Weston,
hand over heart.) 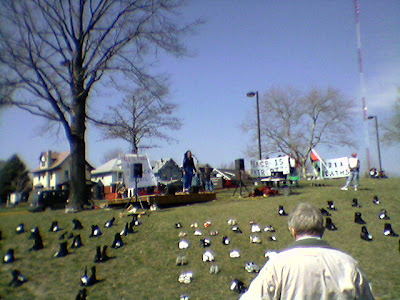 Megan Peterson of Missouri ProVote and Americans against the Escalation
gave a rousing and informative speech on the true costs of war.
She cited a study done by Coalition on Human Needs (.pdf alert)
that crystallized the costs of war for our section of the country
and contrasted those costs with the cost of helping those most in need.

If I get started, I will rewrite her entire speech, so just read the study.
And look for both Missouri ProVote and CHN on the links list in the near future. 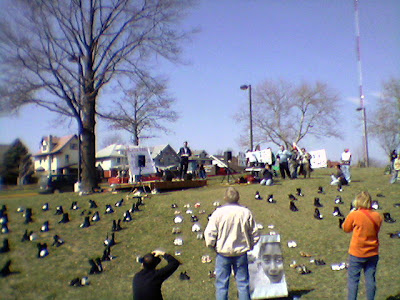 Kansas State Senator Chris Steineger told us what the
Kansans in the State Senate District 03
could have bought
with the $1.1 Billion that they have spent on Iraq: 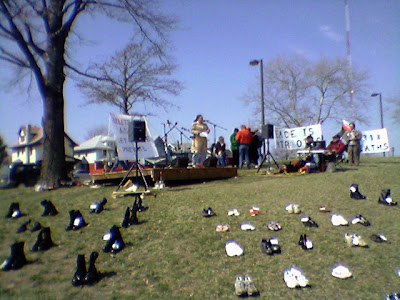 Senator Justus - engaging the crowd and making me proud.
She explained perfectly why it is not improper for
state legislatures to debate the war.
Their constituents are directly affected!
It is therefore their
responsibility to debate it!!! 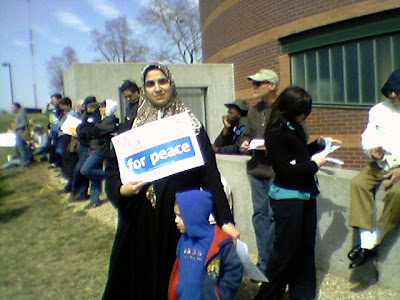 She and I are supposed to be sworn, bitter enemies, being as she is a
Muslim and I'm a Jew and all. But somehow, we just can't see it,
so we decided to take a pass on the whole sworn enemy
and hating each other thing...

Sorry if that disappoints anyone. 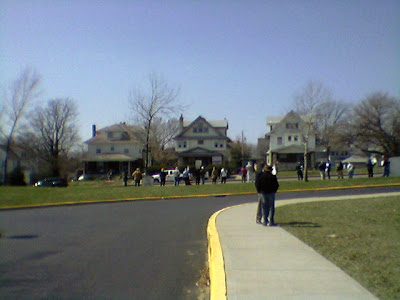 The Sign wavers along Southwest Trafficway received a lot more
honks and waves than they did one-finger salutes. 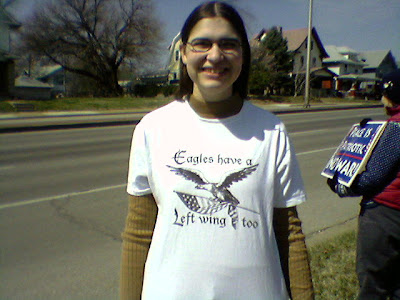 Activists: The Next Generation 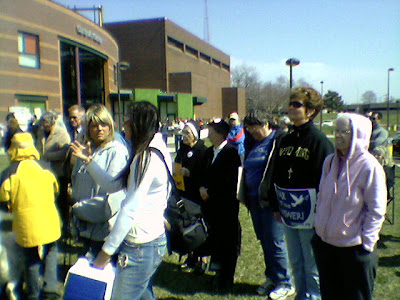 And yes, our little rally qualifies as a legitimate anti-war protest
because there was a nun in attendance.
Everyone agrees that the mere
presence of a Sister legitimizes anti-war protests of all sizes. 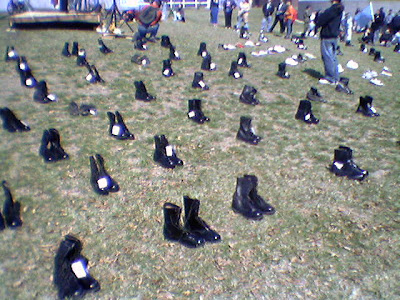 All these empty boots. And when I got home and logged back on,
I learned of seven more pair.

Turn out, tune in, and turn it up.

It's time to bring on the politicians because

there is no military solution.

It's time to stop the war.

It's time to bring the troops home.

It's time to fully fund the VA.

I love, love, love, love, love to see people out protesting this illegal & immoral war.
Every single one that took the time and put in the effort to be seen & heard at this protest get my highest respect.
These are the patriots.

Great posting of the event! Thanks for making sure that aspect got done!

It was great to finally meet you on Sunday. Thanks for all you do!