GAO: Iraq rakes in billions in oil profits while the United States pays for reconstruction

Crossposted from our new home blog,They gave us a republic...

The dramatic increase in oil prices has positioned Iraq, which sits atop the third largest oil reserve in the world, to begin to bear some of the burden of reconstruction of that war-torn country, decimated by more than two decades of war and sanctions.

In a GAO report released yesterday, the government watchdog was deliberate in avoiding assignation of who-should-pay-for-what and thus the politics of the matter. Instead, they did what they do best and stuck to facts and figures - but in so doing, the report leaves little doubt that Iraq can afford to pony over a bit more dough for its own reconstruction. Iraq took in just under $33 Billion in oil revenues in the first six months of 2008, and is on pace to rake in between $67 and $79 Billion this year, meaning Iraq could see a budget surplus of between $38.2 billion and $50.3 billion this year alone. The GAO estimates that this years oil revenues will be double the average annual oil revenues that were realized from 2005 through 2007. The GAO based their projections for the second half of the year on actual sales through the first half, and assumed an average export price from $96.88 to $125.29 per barrel and oil export volumes of 1.89 to 2.01 million barrels per day.


As oil prices settle down at around $125 per barrel, after exceeding $140 just a few weeks ago, Iraq could post a budget surplus of between $33 billion and $50 billion this year. This windfall comes in spite of the fact that Iraq has yet to approach pre-invasion oil-production levels.

Between 2005 and 2007, the government of Iraq spent approximately $67 billion on government operations and investments in the greater society. About 90% was spent on operations, and 10% was invested in structures and durable goods. A mere one percent was spent on maintaining the country. Instead the United States has been footing that bill. Buildings, infrastructure for the delivery of water and electricity, and weapons for the countries police and security forces.

Even as total expenditures grew from 2005 through 2007, the country was unable to spend all of the budgeted funds. For example - last year, 2007, Iraq spent 80% of ths $28 billion operating budget and 28% of its investment budget. GAO estimates that in 2008, Iraq will spend less than $40 billion of its nearly $50 billion budget.

At the end of 2007, the Iraqi government had financial deposits of $29.4 billion, held in the Development Fund for Iraq and other deposits made in the name of the central government in the Central Bank of Iraq and Iraq’s commercial banks. This balance is due to budget surpluses of about $29 billion between 2005 and 2007. 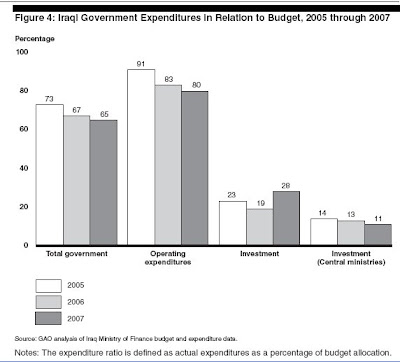 And then there are the American numbers.

Since FY 2003, when the U.S. appropriated approximately $48 billion for stabilization and reconstruction efforts of post-invasion Iraq. As of June 2008, about $42 billion of that amount had been obligated. Of that $42 billion, the United States has spent more than $23 billion on security and critical infrastructure, such as water, electricity and oil. Compare that expenditure with the $3.9 billion spent in these sectors by Iraq between 2005 and April of this year.

Now there are multiple reasons why the Iraqi government has been unable to invest more of its money on capital improvements, and some of those shortcomings were created by the United States and our coalition allies when civil servants were summarily fired by the Coalition Provisional Authority (CPA) and barred from public service for being members of the Bath Party (a requirement for government employment) under the Saddam Hussein regime. When the people who know how to work the levers are not allowed to touch the machine, it doesn't work.

De-bathification was a factor in several areas of shortfall, from operations to procurement and budgeting. De-bathification coupled with sectarian violence and the "brain drain" that resulted from the middle class fleeing the country made government operations in Iraq ineffectual at best. These factors converged and conspired to make it necessary for the United States to fund activities of key ministries to even get the country on a footing where it could begin to execute it's own budget priorities.

Now let me be clear that it is not my intent to debate who should be paying for the reconstruction. If I had my druthers we would be able to unring the bell, unselect George Bush, uninvade Iraq and unhang Saddam Hussein. But as none of that is possible, we have to look at the situation at hand and make realistic assessments. And reality dictates that the United States can not keep up the level of spending we have been engaged in in Iraq. Certainly not with all the problems we face at home.