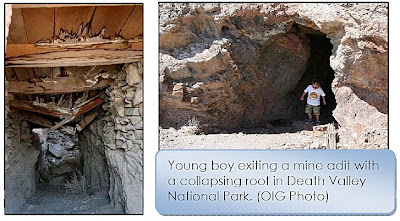 Scattered all over the western United States are more than 12,200 abandoned mines on Bureau of Land Management (BLM) and National Parks Service (NPS) lands, many of which pose significant dangers and public health risks. A recent audit (.pdf) by the Inspector General for the Department of the Interior finds that not only are many of the sites a danger to the public health and safety, but apparently, because they were worried about liability and cost, supervisors told staff members to ignore these problems and that employees "were criticized or received threats of retaliation" for identifying contaminated sites.

To prepare the audit, the Inspector General's staff visited more than 45 abandoned mines. The report highlights two distinct dangers to the public - dangerous levels of contaminants such as arsenic, lead and mercury are present at sites easily accessible to the public; and immediate threats to public safety posed by frequently unmarked open mine shafts and crumbling yet unsecured, access points (see above). "The potential for more deaths or injuries is ominous," the report states. The office said a "limited search" of accident records showed that 12 people were killed at abandoned mines from 2004 to 2007. Go back five more years to 1999 and the number of fatalities rises to 33. 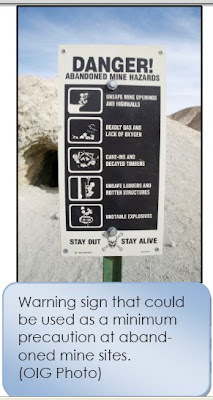 The IG's team found that many of the open shafts weren't even marked. Placement of signs such as this, that could warn unsuspecting hikers, ATV riders and off-road mororists that a mine shaft is in the area and there is the possibility of death or injury.

Population growth and the use of off-road vehicles in the Western states are likely to increase the incidence of additional deaths or injuries.

Some of the open, unmarked shafts are large enough to swallow up an entire vehicle. 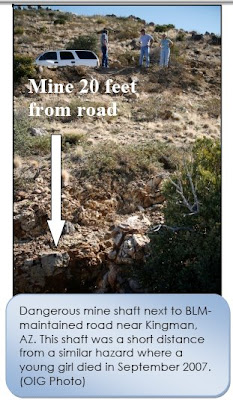 Many of the unmarked shafts are perilously close to public roadways, like the one on the left. 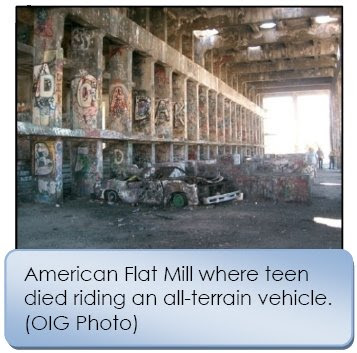 In addition to mines, other abandoned facilities, like the dilapidated mill pictures on the right, also represent significant dangers. 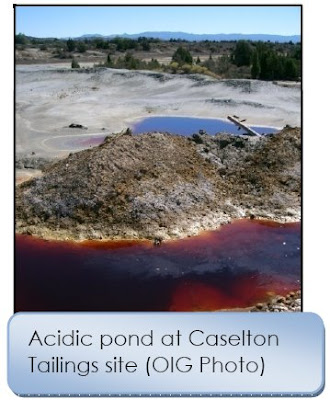 At the 90-acre Caselton Tailings site in southeast Nevada, easily accessible from Hwy 320, the auditors found about three million cubic yards of mine tailings, or mine waste, from an abandoned mill nearby. Those tailings, stored underwater in nine ponds scattered about the site, contain dangerously high levels of heavy metals.

The water in those containment ponds is heavily acidic and contaminated and poses a significant threat to humans and wildlife alike if they consume it, and it is acidic enough to cause serious acid burns to human skin on contact. When the inspectors visited the site, they observed ATV tracks across tailings that are not underwater. The tailings are not marked as hazardous, so outdoor enthusiasts cross them on foot or by vehicle, and inhale the dangerous, contaminated dust.

Mine tailings have visibly migrated down the
Caselton Wash, toward Meadow Valley Wash, and within three miles of the town of Panaca, and local water wells. An engineering study conducted on the site determined that a catastrophic release of mine waste could "severely and significantly" threaten water quality for the population living nearby.

BLM claims that the site poses no threat to groundwater - but has never done a test of the groundwater to obtain baselines or determine if contamination might already have occurred. 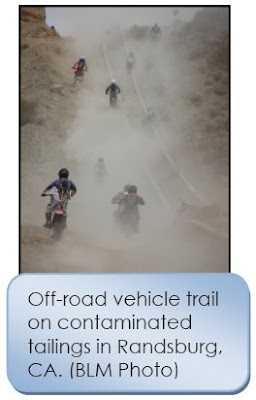 Over the last decade or so, the BLM has been in (so far unsuccessful) negotiations with two entities that are interested in reprocessing the waste products. Reprocessing would reduce the environmental contamination, and could lead to additional resources and further mitigation efforts.

BLM insists that the decision to keep negotiating while the contamination gets closer and closer to the water supply is justified, and in the best interest of the government and the public. Seriously.

While the BLM has control of the majority of the abandoned mine sites on Department of Interior lands, the audit found that it has no effective program to address them. The abandoned mines program has been undermined, neglected and marginalized by poor management practices, insufficient staffing and inadequate resources.

The audit found that the National Park Service (NPS) has been far more successful in mediating the problem of abandoned mines - but the NPS has control of far fewer abandoned sites than does the BLM. Still, the NPS has hundreds, if not thousands, of sites that need to be mediated. At one park, the abandoned mine inventory includes over 600 sites, and NPS officials have inspected less than half of the sites on the 1.4 million acres comprising the park. While NPS has a more effective program, current funding for NPS' abandoned mines program is inadequate to address these hazards, and NPS has failed to develop a credible estimate of the total cost of mitigation.

The audit suggested that the BLM and NPS would be more successful working together to solve the problems than they can be independently. Working together would present opportunities to share resources, expertise, and best practices to improve their programs.

Certainly the expense of cleaning up abandoned mine sites is a legitimate concern, estimated to run into the billions, there are some relatively simple steps that can be taken to decrease the danger at some of the most dangerous sites. Posting signs and building fences where open mine shafts and adits are examples of relatively easy fixes for those threats to physical safety. At environmentally contaminated sites, staff couod reduce air and water-borne contamination by controling dust with sprinklers and temporary covers.

Overall, the cleanup solution is far from simple. It calls for a complex and concerted effort, including the immediate mitigation of known hazardous sites. A calculated effort to identify and inventory unknown sites is also needed, as is a methodological design to address abandoned mines in a comprehensive manner. Securing the necessary funding will be difficult.

The findings of the audit illustrate the urgency of the situation, and ought to trigger a call to action by both the Interior Department and Congress, the audit provided recommendations designed to help develop comprehensive solutions to the myriad problems that, while not of DOI's making, now most certainly fall under their sphere of responsibility.

But the most disturbing finding of the audit remains the fact that they found credible the claims that BLM supervisors told staffers to ignore the problems, and that employees were threatened with retaliation for identifying contaminated sites. One employee stated that adding sites to an inventory list and declaring them unsafe was more detrimental to BLM because doing so acknowledged a hazard and a potential liability.