Missourians, they're coming after our non-partisan court plan again 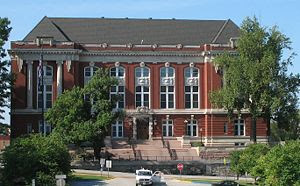 The movement conservatives in Missouri are once more taking aim at our non-partisan judicial selection process.

You remember the Missouri Plan - it is the one that is so screwed up that 36 other states have adopted it and it is taught in law schools as an example of the non-partisan way that the judiciary should operate, that all might have equal confidence in the inherent fairness and non-partisan nature of our courts. But then, a sense of fairness does tend to elude those driven by the movement conservative ideology.

The Missouri Plan was put before the voters of the state in 1940 and passed overwhelmingly in response to the hijacking of the justice system by the powerful political machines of Tom Pendergast in Kansas City and Edward Butler of St. Louis. Under the Bosses, justice resided in their pockets, and nowhere else.

The amendment passed by our grandparents 68 years ago, dubbed “The Missouri Plan”, replaced judicial elections with a judicial commission comprised of judges, lawyers and citizens to review and interview applicants for vacancies on the bench, and winnows the field to three choices. The Governor then has sixty days to select the new judge from those three candidates. If he fails to do so in the allotted time, the decision reverts to the recommending body. At the first General Election following one year on the bench, the new judge faces the voters who decide whether the appointed judge shall be retained.

In balloting to determine whether judges be retained, the state Bar Association issues ratings for the judges before the election, and the ratings and recommendations are made available to the public. It is in the best interest of attorneys and citizens alike for judges to be fair-minded and non-partisan, so the ratings are extremely apolitical.

With Matt Blunt-force trauma stepping down to spend more time with his legal team, the foam-flecked loons are plotting to make it an issue once more, with the appointment of Stephen Limbaugh to the federal bench leaving a vacancy on the state supreme court.

Within minutes of the Limbaugh vote, conservative critics of the Missouri court plan began mobilizing. They issued a series of news releases that, taken in sum, signaled that once again the state’s highly touted nonpartisan selection plan is in their crosshairs.

“I am committed to appointing a Missouri Supreme Court judge who will faithfully interpret our constitution and will not legislate from the bench,” Gov. Matt Blunt said.

Translation: Send me a conservative I can support.

John Elliott, president of the conservative Adam Smith Foundation, said he hoped the Appellate Judicial Commission, the group that screens candidates and prepares a slate of three judges for Blunt, “does not repeat last summer’s mistakes and nominate his replacement under a cloud of secrecy and corruption.”

He added: “In the event that does occur, I strongly encourage the governor to use his constitutional authority to reject the commission’s nominees.”

Translation: We’re prepared to go to war over this pick.

Said Charlie Harris, president of the Missouri Bar: “We … will see the same thing we saw this fall — an all-out assault on the nonpartisan court plan. My message to all citizens of the state and all lawyers of the state is to weather the storm.”

Missourians might recall that we already did this last summer when Ronnie White announced his retirement. The movement conservatives, feeling their grip slipping, attacked the non-partisan process. They said the process is too secretive and lawyers have undue influence. The far-right fringe was pissed that Blunt had to select Patricia Breckenridge - they would have much preferred a conservative-activist stooge who would have furthered baby Blunt's wacky agenda to an actual judge. According to the naysayers, if the wingnut governor isn't free to pick a wingnut for the bench, the process is broken.

But in reality the system has worked very well for us for 67 years, and has served to keep the state courts as apolitical as possible, while efficiently and promptly filling vacancies on the bench with qualified jurists. In the years since 1940, it has been expanded to include all circuit court judges in Clay, Platte and St. Louis Counties.

One of the most elegant features of the plan is the way it defangs the money monster. Success in partisan elections depends on money, on the financial contributors of donors (a very specious proposition when we are talking about the very concept of Justice) and that is what pisses off the wingnuts the most - if they can't influence a process with money, it must be wrong.

The Missouri plan works so well that in the intervening decades, 36 additional states have adopted the plan in whole or in part.

Detractors say that the process is too reliant on the input of lawyers, but that argument doesn't get off the starting blocks with me. Who better to make judgments about legal professionals than other legal professionals? How deep is your experience with judging the competence of jurists? Mine is a thimble of the ocean. If you are like most people you don't know diddly about the court system because you have no business before the bar of justice. If the wingnuts have their way, judges would be elected like state legislators, and what a nightmare that would be if judges owed political favors to certain segments of the electorate, and naturally had a political bias against others. How could you call that justice?

The move to abolish the Missouri Plan gets full-throated opposition from the Missouri Bar Association and other professional organizations representing attorneys of diverse political backgrounds. Proponents of the plan say it eliminates the influence of politics as effectively as is possible. They say that a better alternative simply doesn't exist.

By the way, I have had a word or two to impart about the Adam Smith Foundation in the past, pointing out some things that weren't mentioned in Kraske's article. They are a little hard to take seriously, but he didn't tell you that. Let's go to the archives, shall we?

In June, a thinly-veiled BluntCo initiative rolled out to attack the judicial selection process. Flying under the flag of something called "The Adam Smith Foundation" the minions of the governor went on the attack, while simultaneously playing the victim card....neat trick, that.

(Jefferson City) - The Adam Smith Foundation is proud to announce its official launch as an organization committed to promoting conservative principals [sic] and individual liberties for Missouri. Our Foundation seeks to provide Missourian's with information they need to hold their State and local elected officials as well as activist judges directly accountable for their actions.

"There are countless leftist political groups in Missouri, but only a handful of conservative organizations. We strive to fill an important void by holding politicians in Jefferson City accountable." said John Elliott, organization President. "Big spenders in state and local governments have forgotten that tax dollars belong to the citizens, and we will promote ways to reduce the size of government."

Blunt pursues this agenda at the peril of further splitting the Missouri GOP. When State Senator Kris Koster left the Republican party in August, he cited the Blunt Administrations attack on the judiciary was one of his key reasons for switching parties. Koster, a former prosecuting attorney for Cass County summed up the Blunt administration very well when he said “I can’t think of another administration in our lifetime that has such disregard and such contempt for the third branch of government.”