Pissing off conservative radio--not smart if you're a Republican

If you've just gotten a tentative cease-fire with people like Rush Limbaugh, why the hell would you instantly go after a local wingnut radio host who says things that, well, pretty much every other Republican hack has been saying since day one. I hope McCain remembers to condemn Coulter and Roger Stone, too. He needs all the enemies he can get.

I think we can safely say Bill "Willie" Cunningham, a conservative radio talk show host in Cincinnati, won't be showing up at any more rallies for Sen. John McCain.

It's never a good idea for someone who's sole job is to fire up the crowd before the candidate arrives to utter thoughts that later require the candidate to apologize. And that's what happened today.

Cunningham called Sen. Barack Obama a Chicago "hack" from the "Chicago-Daley Mob." He also said he couldn't wait until the media ripped the "bark" off Obama and accused the senator from Illinois of dubious financial dealings.

What's more, he kept dropping the H-bomb, as in Hussein which is, of course, Obama's middle name.

"Hussein" is often used by many of the senator's fiercest critics to insinuate something sinister about Obama since the name obviously has plenty of negative associations for many Americans, thanks to the late U.S. and Bush family nemesis.

So McCain apologized. He told reporters after the rally that he hadn't heard Cunningham's schtick because he hadn't arrived at the hall yet. But after his staff told him what Wild Bill said, McCain wasted no time in saying he was sorry.

"I take responsibility and I repudiate what he said," McCain gamely said. "I will not tolerate anything in this campaign that denigrates either Sen. Obama or Sen. (Hillary) Clinton.''

As far as Cunningham was concerned, the feeling McCain has for him today sounds like it's mutual.

This is from a the Cincinnati Enquirer:

Cunningham said later that he stood by his comments at the rally. He told his listeners: ‘”I’ve had it with McCain. I’m going to throw my support to Hillary Rodham Clinton.”

Cunningham, a conservative Republican who also hosts a Sunday night syndicated radio show, said he was asked Monday “by a McCain operative” to introduce the Republican front-runner at Memorial Hall.

He spoke to the crowd and left, without meeting or speaking to the candidate, because he had to do his WLW-AM talk show at 12:30 p.m.

Okay, but if we hold you to that promise not to tolerate this kind of shit, will you flip flop? I hope not.

This little item by Dwane Powell of the Raleigh News & Observer came immediately to mind when I read this post. It would be funny if it wasn't true. 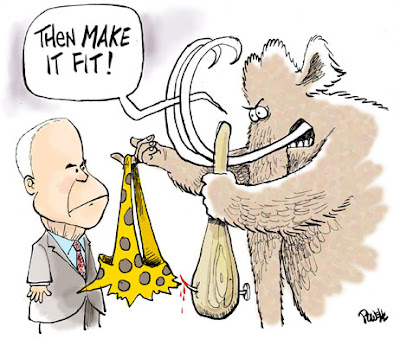 I am not going to look the other way. I am going to confront these mother fuckers and stand my ground. Good for John McCain. Now - let's treat these mouth-breathing idiot rightwing fucks with the scorn and derision and marginalization they deserve. They not only don't deserve a spot in serious political discourse, I don't even think they deserve to be on this side of the cages at the zoo. Mock them. Ridicule them. Expose them. Treat them exactly the way they deserve to be treated.

Then, when they stop spitting teeth and try to stand up, kick 'em again, just for good measure and because the bastards deserve it.
Posted by Anonymous at 2/26/2008 04:25:00 PM