Wasn't there something I was supposed to blog about today?

There's a Republican primary election in South Carolina and both parties held their caucus in Nevada today. 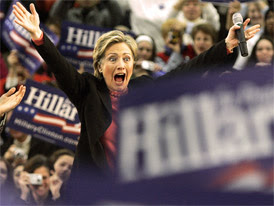 Nevada first...With 88% of precincts reporting, Hillary Clinton was declared the winner with 51% to Obama's 45%. Edwards garnered 4%, and should probably think about withdrawing with his chances for a cabinet position - and his dignity - intact.

On the Republican side, Romney took it standing up, with 53%. Ron Paul and John McCain were tied for second with 13% each.

I guess the Nervous Nellies among Hillary supporters were a bit over-the-top. For the record, they totally took the wrong tack. They should have approached it from the position of "then you have to hold caucuses in hospitals, too." What judge would want to be seen as the guy who upheld a showgirls right to caucus, but nurses can go hang? It was a no-brainer. Apparently. Some no-brain out there fucked that up from Jump Street.

Okay - South Carolina - that's a Republicans-only primary election, and polls won't close for a couple of hours, but Politico.com has a pretty good summation:

Saturday's most crucial showdown was on the other side of the country, in South Carolina, where the Republican contenders try to wrest advantage from each other — after three different candidates won the first three major contests.

The stakes for the entire GOP field are high if history is a guide — every Republican nominee since Ronald Reagan has won South Carolina.

And the weather is absolutely miserable. Can you believe it's snowing in parts of South Carolina?

In the part of the state where Mike Huckabee's support is strongest.

Wonder what God's own Candidate is thinking right now?

God's own candidate, Mitt Romney, did well out in Las Vegas. I've seen some coverage writing it off, basically saying that an overwhelming Mormon vote is the reason for his win in Nevada.

Ron Paul polling at 13% and possibly beating McCain is huge--as is the fact that Ron Paul has a larger constituency within the Republican Party than that of Rudy Guiliani. I'm reminded of Ron Paul explaining why we were attacked on 9/11 and Rudy "not getting it" and trying to belittle Ron Paul for his ideas. As nuts as he is, Ron Paul gets it right on the war and that's gotta be troubling for the overtly pro-war candidates on either side of the aisle.

Tucker Carlson is trying to fan the flames of a Hispanic vs Black split in the Democratic Party. As if. We don't even have a nominee yet. We don't have anywhere near enough information to make that assessment. We have yet to see a large, populous and diverse state vote yet. And the Republican shill machine is desperate.

Tucker--talk about Ron Paul beating main stream Republicans with 50 times the name recognition and then ask us about a split among Democrats. The split is on the Republican side, clearly, because they are seeing candidates who have spent millions go down in flames.

The MSNBC coverage is dominated by Olbermann and Russert. Matthews is the third wheel along for the Prom date, and no one wants to give him liquor because he'll get caught and everyone will get busted by the Gym teacher. This makes for stilted coverage. CNN is unwatchable. They have Bill Bennett in there and all I want to do is ask "did that lardass play the one-armed bandit all day?"

Lets look at the Nevada numbers:

Women were a strong majority for the Democrats in Nevada. 59% of Democrats attending the caucus were female, to 41% male.

On the Republican side, the numbers are closer, but males are a solid majority - 52% to 48%.

The numbers tell this well-versed-in-stats political consumer that the Republican party is entering the twilight years, along with it's stalwarts. It is sooooo yesterday. People who want to move forward are throwing their lot in with the Democrats, and the demographics on the Democratic side are much more stable and desirable. If you read these numbers as if they were in the respective prospectus of companies competing for your investment dollars, where would you invest your money?

Yes--the voters are turned off by the Republicans, they are identifying themselves as Democrats, and the Republicans can't raise money. It's shocking to see how broke some of them are--Guiliani and McCain are literally broke and running on fumes on a day to day basis. Romney is using his own money and Huckabee isn't spending any money. The only who has a legitimate fundraising machine is Ron Paul and he's not going to piss that money away. In 1999, George W Bush was raising millions and was building a massive war chest with which to run. There is no comparison this year. They are all running on fumes.

How about a shout out to Howard Dean? The Fifty State strategy means we are going to compete with Republicans everywhere, and we will make them play a full-court game. As their "brand" continues to sink, we will make gains in places the Washington DC establishment would have written off four years ago.

[so we're going to send a snarling old man after al Qaeda? Will he have bandoliers of ammo and a grenade pinned to his lapel? I hardly doubt al Qaeda is concerned about John McCain. In fact, they must be salivating at the idea that a deranged old coot keeps trying to threaten them. It's gotta help with recruiting.]

something, something, Huckabee, something Sodom and Gomorrah.
"The Road to St. Paul" and all of it's [catholic] Biblical overtones.
John McCain is a "live and let live guy"

Why doesn't Matthews just admit that he would carry McCain to the gates of Hell just to be seen holding a man he loves, in that platonic sort of way.

Schuster is at Huckabee headquarters and he looks like he just drank a quart of vinegar.