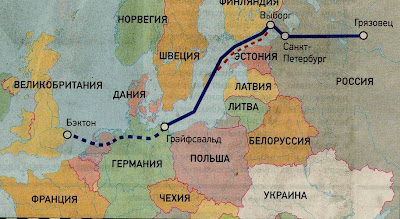 But what is an autocrat to do?

Simple, really. First, you just ignore the fact that Europe is trying to reduce dependence on Russian energy commodities and build another pipeline! Call it South Stream, and have it snake throughout Europe from it's European point of origin in Bulgaria. In the Bulgarian capitol Sofia for a two-day state visit, Putin was unable to resist turning the screws just a bit, and writing in an editorial "Projects like South Stream are in the long-term national interests of Russia and those of our European partners."

Putin has again thrown a wrench in the system. In Sofia on Friday and Saturday, he secured Bulgarian agreement for a new pipeline to cross the country on its way further into Europe. The project is called South Stream, and it's in direct competition with the EU joint project known as Nabucco. The pipeline named after a Giuseppe Verdi's opera connects Europe directly to the sources of gas in the Caspian Sea and in Central Asia -- and the idea was to circumvent Russia altogether.

Europeans, though, have had problems realizing their $5 billion project. So far, Nabucco exists only on paper. And it's still unclear where the gas for the pipeline would come from. There is an agreement with Azerbaijan, but experts doubt that sources there are sufficient to supply the massive project.

Other Central Asian countries rich in natural-gas, like Turkmenistan, have been traditionally within the sphere of Russian influence. Iran could jump in with its gas reserves to fill the gap, but cooperation with the Mullah's regime has run into political obstacles.

Russia, on the other hand, doesn't have any of those shortcomings to deal with. They have plenty of money, and hydrocarbon resources out the wazoo. And they have pulled out all the stops to advance their self-interest - and influence - in Europe. last June, Gazprom and the Italian energy concern Eni inked a deal for the construction of a 900-kilometer pipeline that would go under the Black Sea from Russia to Bulgaria. But that is just for starters. The next step of the project stipulates that the South Stream project shall continue through Italy, Austria and Hungary.

"I think Russia will succeed in securely anchoring South Stream in the European Union. We're dealing with a type of energy foreign policy here and the West has been dozing. But the Russians have a plan and they have the gas and plenty of money," said Alexander Rahr of the German Council on Foreign Relations (DGAP).

Nabucco and South Stream are in a race, and time is of the essence. Unfortunately for Nabucco, the Russians are a step ahead. If South Stream comes on line, it will deliver about 30 billion cubic meters of Russian gas to Europe.

Putin also wants the project to advance because it affords a way for him to circumvent traditional transit countries like Ukraine, Poland and Belarus. "The Ukrainian corridor is not secure," says Victor Gavrilov of Russia's Gubkin Academy of Oil and Gas. A conflict with Ukraine in early 2006, in which Russia turned off the taps and cut off the gas to the Ukraine because the countries could not agree on a higher natural gas price underscored the instability. Kiev responded by tapping into Russian transit pipes crossing its territory, illegally siphoning off gas intended for Western Europe. "But our customers in the West blamed us," Gavrilov says, explaining the official Russian view.

Rahr, assessing the growing European need for natural gas, says, "I think that both pipelines can, and actually need, to coexist." In other words - the construction of South Stream wouldn't necessarily spell the inevitable doom of Nabucco.

But Europe could just forget about reducing their dependence on Russian gas.