Can we all take a deep breath please?

The nomination was not decided last night.

Nobody got crowned, or ordained, or even anointed.

The reality is, this thing isn't over yet - not by a long shot.

It might be over a month from now, after we go to the polls on Super Tuesday, when 24 states - including New York, California and Illinois - the Big Three - will hold primary elections or caucuses. But everyone who knows how this game is played knows that in politics, a month can be a reeeeaaalllly loooonnnngggg time. 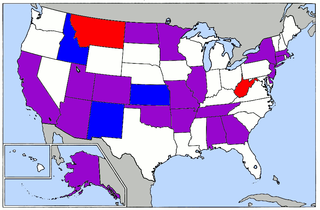 (Blue states on the above map indicate Democratic-only caucuses,
Red means Republican-only state nominating conventions,
and Purple denotes states holding primary elections for both parties.)
A month provides a lot of opportunities for candidates to misspeak or slip up or be misconstrued by the cocktail-weenie wagging poison pens of the M$M - quite often intentionally (and I'm looking hard at you, Maureen "Harping Harridan" Dowd, you miserable twit. I would think that aWol would have given you a Medal of Freedom by now for taking down Al Gore for him. Proud of yourself, and your blood-stained hands, bitch? I know 3,908 families that would like to be able to put your feckless ass in the grave and have their son, daughter, husband, brother, sister or wife on this side of the sod.)

All I'm saying is your Grandma was right - you don't count your chickens before they are hatched, and don't count anyone out yet. The long knives are already unsheathed for Huckabee, and they will be for Obama, too - but those wielding them will be more subtle about it. The only safe group to single out for derisive vitriol these days are white, southern, evangelical, men who don't even have real college degrees. It helps when they don't believe in evolution. There is some mockable, derision-worthy willful-ignorance (spake the scientist).

Those going after the Huckster don't even have to pretend to be subtle. But Barack Obama is a different story, being the first black man with a real shot. What a difference a few decades makes! Fair or not, anyone attacking him outside very narrow and specific parameters will be subject to charges that their attacks are racially motivated, and the knives will turn on the wielders. We've come a long way, but we haven't come that far. An Obama presidency would get us a lot closer, but we aren't there yet.

The reality is, in a nation of 300 Million people, less than 300 thousand have weighed in, so take a deep breath, calm the hell down, and get your head back in the game.