It is cold and nasty outside. The wind is howling and snow is blowing. Inside, it is warm and toasty, and I decided that this was the perfect night for Split Pea Soup and Corn Bread... 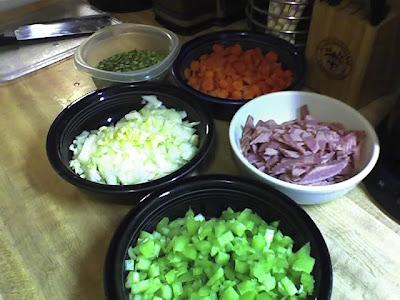 (With two quick switches, this recipe becomes a nice vegetarian lentil soup. First, swap out the split peas for lentils, and instead of using meat, use two cups of yukon gold potatoes, chunked and sauteed with the celery and onions.) 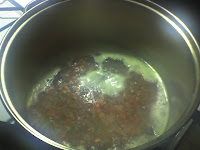 Bring the water and garlic salt to a boil while you get all of your ingredients assembled and prepped.

When the water is boiling, add the split peas, carrots and turkey bacon. (Turkey bacon is pre-cooked, and if you brown it first, it takes on a texture something akin to cardboard.) Bring to a full boil, stir once more, cover, and reduce heat. 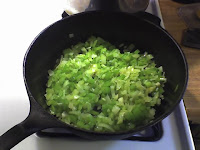 In a heavy iron skillet, get the oil hot - but not smoking. Add the celery, stir briefly and let it brown for a couple of minutes, watching it to make sure it doesn't burn. Add the onion and garlic, stir.

When the onion and veggies are starting to brown nicely and the onions are starting to turn transparent, add the sizzling veggies to the boiling soup pot. Dip a couple of ladles of water from the soup pot to the pan to deglaze the skillet, then return that water to the soup, add the white pepper, stir, cover and simmer for 30-45 minutes.

While the soup simmers, make cornbread. I usually make it from scratch with buttermilk, but I tend to keep two or three packages of Arrowhead Mills mix on hand for those times when I am out of an ingredient, or just in a hurry. Tonight, I used a mix, but I still used buttermilk. I'm not a philistine, you know. 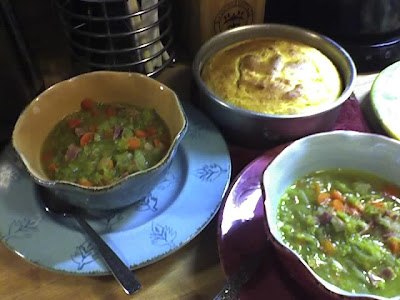 First, you have to have a good, heavy bottomed stock pot. I sucked it up and spent $75.00 on a Dansk pasta pot a few years ago, and have never looked back. It does double duty as a stock pot, and it has the deep basket liner that I can insert when boiling pasta or potatoes, then just lift out the liner when what I'm cooking is done. This is especially handy when I boil potatoes, because I haven't bought a loaf of bread in years. I use my bread machine practically every day, and potato water makes wonderfully light, soft bread. (If you bake bread, you gotta have this knife.)

Next on my must-have list is a good iron skillet. The single most often-used item in my kitchen is a Wagner cast-iron chicken fryer. I use it for something practically every meal I cook. It is basically a standard iron skillet, but it's a couple of inches deeper.

Finally - cutlery. You can have your chef's knife, I much prefer a good, sharp cleaver. As luck would have it, I live a mere three blocks from Ambrosi Brothers - one of the best specialty cutlery businesses in the country. They sell primo products, and they sharpen!
Posted by Blue Girl, Red State at 12/23/2007 09:58:00 PM