War is not healthy for children and other living things 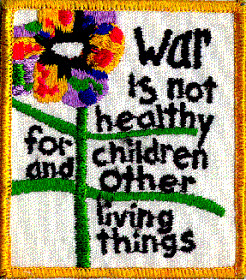 Just in time for Christmas, UNICEF has released their preliminary findings from a report on the status of children in Iraq after nearly five years of warfare.

The findings are grim.

“Iraqi children are paying far too high a price,” said Roger Wright, UNICEF’s Special Representative for Iraq. “While we have been providing as much assistance as possible, a new window of opportunity is opening, which should enable us to reach the most vulnerable with expanded, consistent support. We must act now.”

Among the problems highlighted in the report
And still, against all odds and that reality - UNICEF and other aid organizations managed to deliver critical assistance even though they struggled under the yoke of the lowest funding levels since 2003.

Health care was delivered and house-to-house immunization campaigns were waged, protecting four million children from polio, and three million more from measles, mumps and rubella. Because of dedicated efforts like these, Iraq remains polio-free, and cases of measles dropped from over 9,000 in 2006 to just 156 in 2007.

Nearly five million children benefited from efforts to deliver educational services. Materials and textbooks were supplied, schools were rebuilt and restored, classrooms were added to existing structures to accommodate displaced children who were forced to relocate to flee violence and ethnic strife. (It is estimated that approximately 83% of Iraqi children of primary school age were in school in 2005-2006. The numbers for 2007 are currently in the crunching process.) 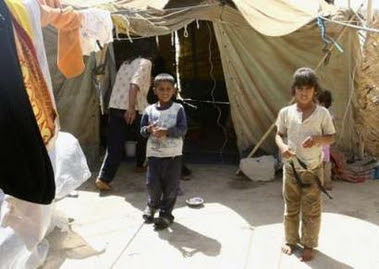 Shi'ite children in a refugee camp near Najaf
UNICEF has been instrumental in providing sanitation, hygiene and most importantly - clean, potable water to as many as 500,000 internally displaced refugees. Currently, at least 200,000 Iraqis only access to clean water is a UNICEF tankering project. These are the most desperate and destitute, living in tent cities that have sprung up, populated with people who fled the violence but had no where to go.

As security improves, a clearer picture of the needs of Iraqi children will emerge, but UNICEF stresses that the challenges will be amplified by repatriating families, who will be some of the most vulnerable citizens in need of help. Many have exhausted savings and are returning to homes that may or may not be standing, and if standing, they may be standing on an ethnic battleground.

To meet the coming challenges, UNICEF and its partners are spearheading IMPACT: Iraq. IMPACT: Iraq is an initiative that draws together a network of NGOs and UN teams to rapidly assess and respond when families are vulnerable. The intent is to facilitate local recovery, because strong families make strong communities.

To help seize the current opportunity, UNICEF calls for support to:

1. rapidly increase attention and action to meet the immediate needs of children and families inside Iraq - focusing on all vulnerable groups;
2. widen humanitarian access to Iraqi children and their families in conflict zones, behind security barriers and in detention centres; and
3. strengthen Iraq’s capacity and initiatives to improve governance and mobilize its own resources to invest in national recovery.

“Iraqi children are the foundation for their country’s recovery,” said UNICEF spokesman Wright. “Where children’s lives are protected and revived, community recovery will swiftly follow. We continue to owe them our very best in 2008 and beyond.”

I agree. Now, in the spirit of the season, let's give the late, great, John Lennon the final word: