Losing the Cold War after the fact 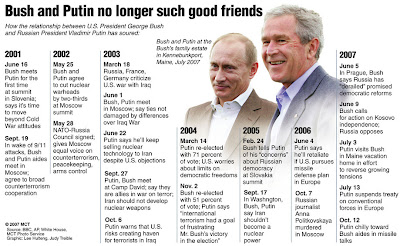 Not content with mismanaging a war and an occupation to the point that stands to end up with not just one, but two hash-marks in the "L" column, the chump in charge has reached back into the recesses of time and managed to give it a go at reversing the outcome of the freakin’ Cold War, too.

Seriously – didn't anyone else cringe when the cowboy was selected by the Supremes to parry with Putin? I sure as hell did. Panic at the prospect of the little idiot in negotiations with Russia was one of my first reactions.

C’mon – on the one hand you have a moronic, coke-addled, intellectually incurious, sociopathic, amoral, inept and hapless doofus who failed upwards his whole life…and on the other a former KGB case officer – decisive, derisive, stridently nationalistic, cold, calculating and competent. There was simply no way in hell this was going to work out well for United States interests, but not enough of us “got it” and of those of us who did, not enough were speaking up; so those of us who did voice our concerns were viewed askance, like we needed a shiny jacket to go with our pretty tinfoil hats.

When the affable moron met the spy in in the summer of 2001, and claimed he had “looked into his soul” and saw a good guy, I guffawed, and the mockery in my household was overt and palpable. The entire family got weeks of mileage out of “looking into souls.” Our oldest was leaving for college that summer, and we looked into the soul of the laptop salesman, the residence hall coordinator, the university bookstore clerk, the financial aid officer that administered his scholarship…pretty much everyone we came in contact with for weeks got a good soul-peering.

We aren’t laughing any more, though, because the fallout of aWol’s inept foreign policy is no laughing matter.

Bush and his circle of bubble-supporting yes-men, lackeys and corporate good-ole-boy cronies grossly misjudged the Russian leader, just blithely assuming he was “a good guy” and “one of us.” (In their jingoistic worldview, it is just assumed that everyone wants to be “like us” or they simply aren’t worth bothering with). The ethnocentric, swaggering, bloviating asshats just couldn’t see it coming, but our emic was bound to crash into theirs.

It did, and the results of this prolonged foreign policy train wreck have been painful to watch, especially for those with an awareness and understanding of the historical relationship between the two superpowers. In the wake of the terror attacks of September 11, 2001, there was unprecedented cooperation between the two nations. The Russians shared intelligence, and the government turned a blind eye to the dirty war raging in .

Now, there is not even a pretext of cooperation and common goals.

Secretary of State Rice and Secretary of Defense Gates (two so-called “experts” on the former Soviet Union, both of whom failed to read the handwriting on that crumbling wall) went to to meet with the Russian president last week.

First Putin kept them waiting for over a half hour. Then he openly mocked their mission in front of the press and the T.V. cameras.

On Saturday, Defense Secretary Gates said that he isn’t sure is even interested in cooperating with the to defend Europe against Iranian missiles or whether “simply wants to stop the from building missile defenses in .” (emphasis mine).

Gates, speaking with reporters on his trip home, showed us some of that prescience he is famous for (remember, he was the CIA’s expert who insisted the Soviet Union was reemerging as it was crumbling) saying he believes is reasserting it’s presence on the world stage. "I think President Putin is coming back and saying you know you have to take us into account on all these things. In essence: 'We are back. We've got a lot of money. And we are a key player.' " Then he quickly added "I'm putting words into his mouth. He didn't say these things. This is my interpretation of perhaps his thinking: 'And you will need our help to solve problems. And if you won't seek our help, we can prevent problems from being solved,' " Gates said.

Of course is reasserting dominance and flexing muscles, and has been for some time! I dunno about the SecDef, but I have been paying attention. In April, it went largely unnoticed when it became official Russian policy to refer to the in an adversarial manner in official reports and press releases. In May, they tested a new MRV-ICBM. In July, they laid claim to the North Pole, an International Zone. In August, their pilots started buzzing for the first time since the cold war. In October, the Russian President mocked and humiliated two cabinet secretaries.

And I haven’t even brought up the energy issue. Not directly, anyway. But that is what it all boils down too. has Energy, the west needs that energy, and is not a country we can just invade, commence “kickin’ ass” and take it away from.

This administration has destroyed American credibility, negotiating power and economic stature. A solid victory in the Cold War, after a half-century of ideological brinksmanship and reams of hard-fought treaties, has been cast aside.

If there is one person on the face of the earth who is more pleased than Osama bin Laden to see the mired down in , bleeding away blood and treasure, and destroying the finest Army the world has even seen, it is Vladimir Putin.

What scares me even more than the damage that will be done to this country by another year of fighting in is the long-range damage being done to our foreign policy by another year of Bush incompetence. The destruction of the relationship with Russia is arguably the greatest threat to long-range security that the United States will face for the next 50-100 years.