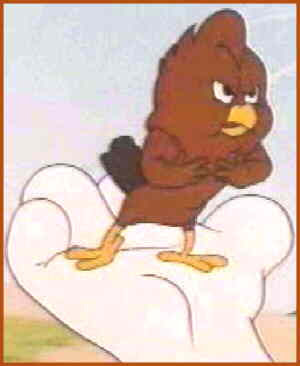 The cloying fly in the editorial ointment at the Star struck again last Sunday. But then, at our house, we say “If it’s Sunday it must be McClanahan!” Then we start making fun of him. (He just makes it so easy!)

The Democratic Party is full of defeatists, you see, because we have the ability to perceive reality.

When the WMD’s became histories first proven negative, victory in became unachievable. When the lies that launched the war became obvious to all save McClanahan, reasonable people realized that as objectives had ever been clearly defined, they couldn’t be realized.

He is quite chuffed at the lack of enthusiasm for the fight among those with something to lose – like life, limb or loved one. Hell, he’s still pissed off that we didn’t sacrifice a few thousand more in southeast Asia.

He simply refuses to get it. Iraq is embroiled in a multi-faceted sectarian civil war, and we don’t get to win it.

I opted not to reproduce a snippet of last Sunday’s column, but really, every McClanahan column of late is a variation on the same theme. He is quite obsessed, to the point of pathology, it would seem, with the notion that all Democrats are quite simply traitors and cowards. If he isn't yammering about that, he's pissed off because he dislikes the architecture in the midtown revitalization that has made my property values soar. He's frankly a pedantic fuck no matter the topic.

I am not going to waste bandwidth to repeat his idiotic ramblings, but feel free to click here if you want to wade into the festering swamp for a sample of McClanahan’s fevered "mind" at “work.”

I will, however, give you some background on E. Thomas.

He is a chickenhawk of the first order. He went to – but he never saw the brush except when he flew over it. His pasty white ass was sitting in an air-conditioned office sending missives about “defeatocrats” back home even then. He is perhaps the original keyboard commando; and frankly a pathetic, contemptible and sad little man.

McClanahan is so ginned up for the fight, and thinks the troops can get by just fine without a year off between year-long deployments, he should find out first hand, and not from an air conditioned office this war. McClatchy should send him to Anbar to embed with some Marines immediately.

For a year. Then send his ass back in seven months to do it again.

Until he puts his own skin in the game to report from the front, I simply can not take a single word he writes about war seriously, including “and” “the” and “of”.

Email ThisBlogThis!Share to TwitterShare to FacebookShare to Pinterest
Labels: chickenhawks, McClanahan (Thomas), Wanker of the Week™

Am glad you blogged this. Mr. mbg has had a bitch with ET for 20 some years now, ever since he first wrote about what a "cake walk" Nthatam was. I have wanted to find that article but those that date back that far are extremely hard to find in the archives without an actual date. Glad you picked up on this. Oh yeah!

That was kinda spooky, sister-friend! At the very same moment you were posting your comment, I was updating the post with the dedication to Mr. MBG! I mean the very instant...

Actually, et was bitching about how bored he was. I knew marines who volunteered for combat patrols who were also office personnel. One arguement et espoused was to shut down the ho chi minh trail. I guess he couldn't grasp that this was tried with no success for ten years.