Someone Remind McCain about the "First Rule of Holes"

When you are in one - stop digging.

After everyone under the sun jumped on CBS's Isvestia turn, where they edited out his embarrassingly wrong answer to a question in which he credited the Surge™ - which got underway in February/March 2007 with bringing about the "Anbar Awakening" - which was announced by then-Colonel, now Brigadier General Sean MacFarland in late September 2006 - in an interview with Katie Couric. Bloggers and Keith Olberman pounced, and rightly so.

He didn't back off his deranged assertion, but he did cancel a press availability and the timing of canceling the only presser this week sure smacks of a fear of the questions that would be asked.

Especially when you tug the threads a bit.


When The Swamp contacted McCain's campaign to get further comment on his astoundingly ignorant assertion, campaign spokesman Tucker Bounds bravely soldiered on, asserting that "Senator McCain is correct. As General Petraeus has made clear, the surge is the reason why the Anbar Awakening was so successful in tearing up al Qaeda."

Let's strangle that baby in it's crib right now. The Surge™ had fuck-all to do with the tamping down of the violence in Anbar. Only one brigade surged into Anbar, for fucks sake - and besides that, Petraeus' own testimony before Congress (you would think that McCain, with the unhealthy awe he shows Petraeus would sleep with a copy of the report under his pillow) shows that the violence in Anbar started declining months before the extra 3000 or so troops got to the vast, sprawling Anbar province.

See? I even have charts from the report Petraeus delivered to Congress to prove McCain is just making shit up. 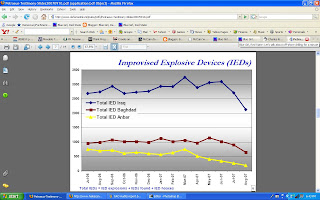 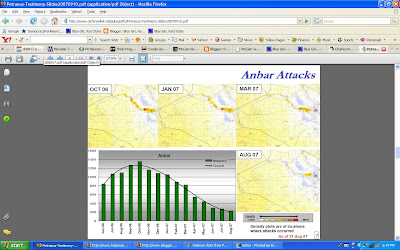 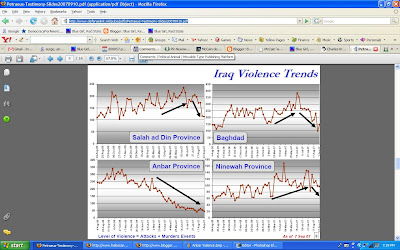 No, the violence abated there because we rented some temporary loyalty from some really bad people, like a thug named Abu Risha, with guns and ammo, and with money. It was a Hail Mary thrown as the buzzer was about to sound and it worked in as much as it tied the game and took it into a sudden death overtime.

But the Surge™ didn't have much, if anything to do with the so-called "Anbar Awakening" - and by the way - McCain last night was crowing about the Surge™ providing the security for Abu Risha to lead the movement among tribal leaders to ally themselves with the Americans against the foreign interlopers calling themselves al Qaeda. Just one problem, and if you clicked Abu Risha's name above you know what it is. He was assassinated in a bomb blast last year, along with four of his bodyguards as he left his compound in Ramadi.