That was a damned classy ending...

Hillary gave a damned strong concession speech, and Obama was quite gracious in his acceptance. Maureen Dowd won't like it of course, but then, nobody likes Maureen Dowd, so who cares?

Now everyone needs to show the class shown by both of the candidates. The rabid supporters need to let it go and be gracious - in both camps.

It isn't about anyones hurt feelings, it is about finding a way out of Iraq and saving the Supreme Court. Anyone so aggrieved that they are going to vote for McCain, or not vote at all, well, you're either certifiably fucking crazy, or you are the most selfish prick the world has ever seen. Get over yourself.

I just went to the Obama website to sign up to volunteer and do my p[art to get him elected President of the United States, and this is what I saw... 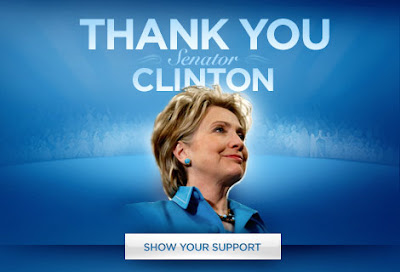 And it gets better...Below the fold is the video of Obama's speech after her endorsement...


Like I said, a damned classy ending to a historic primary. Now let's get busy and elect Barack Obama president.