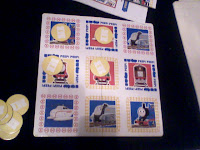 The trip to Pier 1 and Home Depot got shunted aside - our son had some time this afternoon and came over to hang out and play with his niece. I don't see him very often, and neither one of those stores are going anywhere, so that errand will keep for later.

After a marathon session of Chutes & Ladders, they moved on to Thomas the Tank Engine Bingo. In this version of the game, geared to four year olds, you roll three dice. One has the characters, one has the border colors, and one has the background colors. When you have the combination that is rolled, you put a chip on the square, and a tic-tac-toe wins. 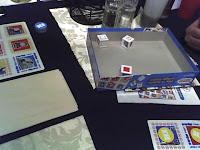 Zoe rolled, and her Pop-Pop called out "James All-Red...Gloria's brother," at which point our son cracked up. Then the topic somehow became the editorial page at the New York Times, faster than you could connect Kevin Bacon to Kenny Loggins. Son asks Dad if he read the Applebee's faux pas in David Brooks' column earlier this week. Before he was finished speaking, the weekly dose of all things Brooksian started on NPR, and Zoe pipes up and says "Shut up David Brooks, you nimrod!" (I wonder where she could have heard such a thing?)

Anyway, I thought some of you might enjoy that little slice of life from Casa Blue Girl. If you got a chuckle, all the better.