One more down, three still to go 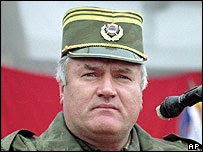 Thirteen years after the end of the war in Bosnia, one of the top four Bosnian Serb officers wanted for war crimes and genocide has been arrested in Belgrade and will be extradited to The Hague to stand trial on charges of crimes against humanity.

Stojan Zupljanin was the police commander in Banja Luca, and in that capacity he had operational control over the detention camps where Bosnian Muslims were held in horrific conditions, and thousands upon thousands of people were murdered because of their ethnicity. He is also accused of wiping out entire communities of Bosnian Muslims and Croats in the Krajina area.

"Stojan Zupljanin was arrested today near Belgrade ... police and security agents took part in the operation. He should be extradited to the Hague in the next 72 hours," said Bruno Vekaric, spokesman for Serbia's special war crimes prosecutor's office.

He said Zupljanin, 56, was found at an apartment about 8 km (5 miles) from the centre of Belgrade and would be taken before an investigative judge at the war crimes court in Belgrade before being extradited.

"There was no resistance during his arrest," said Vladimir Vukcevic, Serbia's chief war crimes prosecutor, who coordinated the operation.

"This arrest shows clearly that we are seriously cooperating (with the Hague) and there is the political will for full cooperation."

He said a previous attempt to arrest Zupljanin in the southern Serbian city of Nis, had failed and the suspect escaped. He did not say when this took place.

A spokeswoman for the prosecution at the U.N. war crimes tribunal in The Hague also confirmed his arrest.

Zupljanin, a commander in the city of Banja Luka during the 1992-95 Bosnia war, is charged with killing Muslim and Croat civilians.

The arrest of Zupljanin is welcome news indeed - but still at large are Ratco Mladic, Goran Hadzic, and Radovan Karadzic. The arrest of these three men remains a huge stumbling block between Serbia and an invitation to join the European Union.

"Cooperating with The Hague is a precondition for Serbia to begin its EU integration," said political analyst Marko Blagojevic of the independent Centre for Free Election and Democracy. "This is a step forward for Serbia."