When Shirley Preiss was born in Kentucky in 1910, the state did not yet issue birth certificates, and women had not been granted suffrage.

Now, after living 97 years, and nearing the end of her time on earth, the Surprise, Arizona woman finds that she has come full circle. She is every bit as disenfranchised from the political process today as she was the day she was born.
The former schoolteacher is still pretty sharp at 97, pointing out that for someone who once lived in a time when women could not vote, the law is a step backwards. She has voted in every single presidential election since 1932. "I'm a legal American," Preiss said. "I'm born here. Born and raised in America."

So how has this happened? 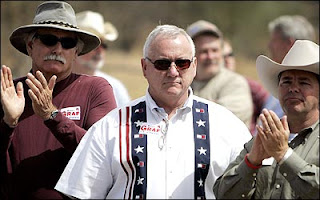 The Arizona voter I.D. law, one of the most restrictive in the nation, was approved by voters in 2004 and upheld by a federal judge on Monday. The law, which sprang from the fetid, fevered, xenophobic little republican brain of state representative Russell Pierce, requires voters to produce specified types of government issued identification when casting ballots at polling places, and to provide proof of citizenship when registering to vote either for the first time or in a different county of residence. Pearce doesn't feel any qualms about the disenfranchised. "To get a movie, you have to prove who you are," Pearce said. "To go rent a car, you have to prove who you are. That's part of life."

Of course, Pearce doesn't acknowledge that one doesn't need to prove citizenship to board a train, cash a check, rent a movie or rent a car. Nor does he acknowledge that there is a significant number of people who don't do any of those things he rattles off as everyday, routine things. Not everyone drives, not everyone travels and I know my grandmother never once in her life rented a movie or showed her ID when she wrote a check.

He insists that the law will protect the integrity of the voting process. (Please, note: that integrity was never in jeopardy, this has always been a solution in search of a problem, an attempt by republicans to eliminate some of the competitions reliable votes, and everyone who isn't an intellectually dishonest jackass or sycophantic party shill knows it, and we are operating from the assumption that the folks who fall into that category aren't reading this blog.)

"You can see my mother's not a national threat," said her son Nathan Nemnich. "Been voting since 1932." Nemnich produced the files documenting his attempts to get her registered.

"A delayed birth certificate," he said. "You have to have witnesses. Everybody's dead.

"When the family tried to get school records from Tennessee, they found out the school no longer exists.

"We're talking about something that is so precious, that right to vote, "said Linda Brown of the Arizona Advocacy Network. "How many hurdles are OK to jump through? How many barriers are we going to accept?"

Her son said his next step will be to call the governor's office for help.

Election experts say that while there is no way to know exactly how many Arizona voters have been affected by the voter suppression effort, but at least 40,000 voter registration applications have been denied since application of the law has been in effect.

Huge swaths of rural elderly voters - the very people who were children or who came of age during the depression and who remember the New Deal and the very real impact those programs had on their lives - and who have had the audacity to live long lives because they received Social Security and Medicare - are the very people most disenfranchised by these craven, cruel, antithetical-to-America voter-suppression schemes. The cynic in me says that is by design. We are fucked again, just like we were 75 years ago, and this time the republicans want to keep us down. Can't have those old-timers fucking up their grand schemes of oppression.