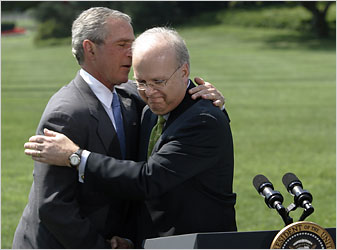 Lee Atwater 2.0 is stepping down from his official role on August 31. He leaves in his wake a fractured country, a destroyed Republican party, and a shredded Constitution.

He will not be missed.

He leaves a legacy of "no depth is too low to plumb" where politics is concerned. He masterminded turning the Department of Justice into the enforcement arm of the Republican Party; transforming it into the department of "Just Us."

He was the brain trust that came up with the tactic of outing a CIA agent whose diplomat spouse dared tell the truth about the lies told to whip up an unjust and illegal war.

Karl, we aren't done with you yet. You still have a lot of 'splainin' to do, and may you see prison attire, if not the gallows, before it's all said and done. You say you want to spend more time with your family - we want to see you spend some time with the Judiciary Committees.
Posted by Blue Girl, Red State at 8/13/2007 11:49:00 AM