The Great Kansas GOP Unraveling of 2007 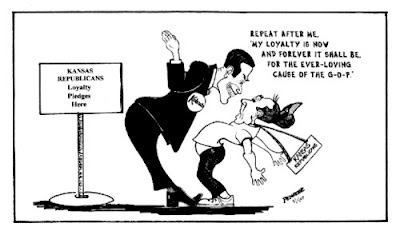 I have known for years that the KS GOP was sublimely nuts, but it has officially
crossed the street and now resides in the same zip code as Ridiculous.
I am firmly rooted in the fertile soil of Missouri now, but for a big part of my adult life, I called Kansas home. Okay, I was ordered to call it home, but still...I had kids in school, so I voted locally rather than absentee in Missouri those years. (That's how the military vote breaks, by the way, and I'm going to keep saying it until someone listens. Service members vote absentee in their home state when they don't have kids in school. When they do, they vote locally.)

So on orders from the US Air Force, I had a front-row seat to the Kansas GOP unraveling. I have watched that train wreck unfolding for 20 years, the last six years as a next-door outsider with KS-GOP PTSD.

The redistricting that took place between billets in Wichita that resulted in nine-term Democratic congressman Dan Glickman being thrown out of office in favor of Todd Tiahrt - coupled with the loss of Slattery in the KS-02, vacating the seat for Jim Ryun when he failed in his bid for the governors mansion against Bill "high and tight" Graves...Oh God...the trauma of 1994...I thought those wounds had healed...

Looking back, I think that the redistricting that put Hutch and Reno County in the "Big First" is an example of gerrymandering gone bad. The Republicans in Kansas got their super majority - but in doing so, they pursued a path that led ultimately to the destruction of the party. When perennial loser (in every imaginable sense) Mark Gietzen gained prominence in the Kansas GOP, I started picking out my funeral attire. Anyone who can make Tim Shallenberger come off looking like a moderate is truly 'round the bend.

(Full disclosure: I know, and despise, Mark Gietzen. Our children went to school together. The fact that my half-Jewish children were even in Catholic school maddened him, and his reaction just made me make jokes about his cheesy Godwin-violating moustache, and take shots at his pro-life pathologies. For the record, he is a convicted wife-beater, and yet infallible enough to declare that being a registered Democrat is a "Sin.")

I am confident my former neighbors will go for that idea with gusto! I mean, if there is one thing I learned in all those years of observing Kansans, it is that they are a really stupid group of people clambering for Daddy-figure politicians like KK (just need one more, there, Sport...) to unencumber them from the thought process.

[FYI - the Cartoon is by nationally-syndicated Missourian Brett Penrose who will be appearing here frequently.]
Posted by Blue Girl, Red State at 8/05/2007 11:43:00 AM