Taking a step to right a wrong

[Cross-posted from Watching Those They Chose]

There is a travesty occurring in our midst, and my Senators are doing something about it.

Yesterday, Missouri Senators Christopher (Kit) Bond and Claire McCaskill joined forces to sponsor an amendment to the National Defense Authorization Act for FY 2008 that would temporarily suspend the Pentagon’s use of Regulation 635-200, Chapter 5-13: “Separation Because of Personality Disorder” discharge for combat veterans, pending a thorough and comprehensive review of the current procedures and the establishment of an independent discharge review board. They were joined by additional co-sponsors Barack Obama, Barbara Boxer and Patty Murray.

Senator Bond was the only Republican to sign on, and this Missourian gives him a standing ovation for putting sound policy and the welfare of those who step up to serve ahead of politics.

"Abuse of personality disorder discharges is inexcusable. This amendment will put a stop to these discharges until we can fix the system," said Senator Bond. "The men and women who put their lives on the line to defend our freedom have earned a debt of gratitude from all Americans that we will never be able to pay in full. The very least we can do is take care of their battle wounds, whether physical or mental, and ensure they receive the treatment and benefits they deserve."

The abuse of the 5-13 is especially insidious, because it is being used to deny combat veterans the benefits and care we owe them. A Soldier, Sailor, Airman or Marine discharged under Regulation 635-200, Chapter 5-13 stands to lose all benefits. They can not collect disability pay; even for life-altering injuries sustained in combat; nor are they entitled to medical care through the VA for those very combat injuries.

In a prepared statement, Senator McCaskill said “We have no greater obligation to those who serve our country in the Armed Services than to ensure they get the care they’ve been promised. We cannot stand tall and proud as Americans if we allow one single service member to go without the benefits they deserve due to a misdiagnosis. Far too many combat troops serving in Iraq and Afghanistan are returning with mental health injuries that bear the potential for misdiagnosis, and we need to do all we can to prevent that from occurring.” 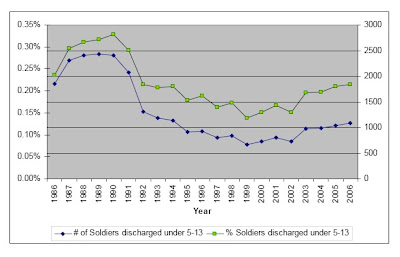 (Click to enlarge)
The use of the 5-13 has skyrocketed in recent years, rising precipitously as the occupation of Iraq takes its toll. G.I.’s who are seriously affected by PTSD and traumatic brain injuries (TBI) the signature injury of this conflict, have been discharged from service under the 5-13, which implies a pre-existing condition – even when they have received service commendations, been allowed to reenlist, and received reenlistment bonuses – only to find out when they are out-processing that they will have to repay thousands of dollars of their reenlistment bonuses. The bonuses carry with them a commitment to serve the entire enlistment. If it is not served, they leave with no benefits, no care for their injuries, and in debt for the portion of their bonus that the military paid and did not get service for.

After serving honorably and going to war, they are simply thrown away.