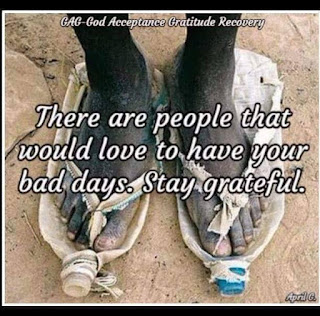 I used to work with another Lab scientist who was from Nigeria. Every time someone would show up with something new or talk about buying a new car or making a home improvement...you know, normal grown-up shit that costs money and you bitch about to your co-workers -- Walle would hoot and say "Oh you must be a very rich (wo)man to afford that!"
Eventually it was my turn. He did not know that I have been outside the US and the comforts of home and seen real, grinding poverty and slept under mosquito netting -- or tried to -- and Surprize! there is rebel activity in this sector after all...
When he said to me that I must be a very rich woman I turned around in the doorway (I was leaving, our shifts overlapped by an hour) and looked him in the eye and said "I am. I might be clinging to middle class by my fingernails in this country, but globally? I am very, very rich indeed." This caught him unawares...he was not expecting the whitest woman in the world to give that answer. He was silent for several seconds. The whole lab was. It was really kinda weird. Then he said "That's right. You are," and he turned and walked into the blood bank.
He never made the "rich woman" joke at my expense again. And Johnson County dumbasses that they were, even though they knew they answer that would shut him up, when he razzed them, they weren't smart enough, or more likely just couldn't bring themselves to, copy off the Liberal's paper. 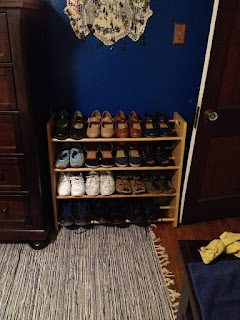 Then you have me...These are just the shoes, and the rack is full. And there is a closet in another bedroom full of boots. And we aren't even going to talk about purses. Or laptop cases. Or umbrellas. I don't drive! When I get caught in the rain I do what any New Yorker i.e. normal person would do. I buy a fockin' umbrella.
Posted by Blue Girl, Red State at 8/14/2016 04:33:00 PM