I already miss you, Kristy 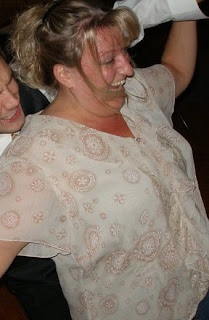 My cousin was murdered last week.She was in Jackson, Mississippi on business for Job Corps, where she had worked for many years.She was actually Tom's cousin, but I frequently joked that I married him so I could be related to her.I was the only "big kid" that her dad, my husband's favorite uncle, would let her get in a car with when she was a young teenager.When Jimmy Ray and I were inventing the concept of "friends with benefits" she was jealous because he was her crush. When I had to tell her he was dead, she was devastated. A couple of years after that, she had to call me to tell me that Tom's brother had died in his sleep the night before.The summer between my Junior and Senior year, Jimmy Ray and I were parked at the water tower one night to do what kids in rural Missouri did when they were parked at water towers in the late seventies and early eighties...we were there to smoke dope and screw.What we didn't know was that Kristy and her best running buddy, Richard, had climbed the water tower and were started down when we pulled in. I had shed my swimsuit cover-up and was rolling a joint, and I was already having a hard time because Jimmy Ray was pawing at me when I got the holy hell scared out of me...Kristy and Richard had proceeded down the water tower and snuck up on my car and slapped their hands against the windows on either side and started whooping and hollering. Weed went everywhere, Jimmy Ray looked like a frightened rabbit pulling up his swim trunks, and I screamed. I looked to my left, terrified, and saw Kristy, laughing her ass off, on the other side of my drivers side window.
I'm the only person left who was there that night; and all of the others died far too young and their deaths were senseless. Jimmy Ray died of an overdose in January of 2009. Richard died later that year -- just hours befor Kristy could get to the hospital -- of the same complex lung and bone cancer that has claimed or is claiming the lives of everyone who cooked meth around our home town in the 90s and early 2000s.Kristy was murdered with an assault weapon, a military-grade rapid-fire gun.Her son was deployed to war zones twice, and had his best friend die in his arms on his first deployment, but his mother was gunned down with a weapon of war in a steakhouse parking lot, in daylight, in an American state capitol.Let that sink in.Our son was born about a year before hers was, and she simply reversed the order of the names we had chosen, then when her first grandson was born, she switched them back, so our son has a ten-year-old namesake. When he was putting that Rockhurst University Philosophy and Theology education to work as an IBEW electrician, he found himself working in Excelsior Springs, where she lived, about 30 miles north of Kansas City. He stayed to work an hour of overtime, and discovered when he got in his truck to leave that his gas light was on, and his wallet was on my kitchen table. He had taken it out of his pocket when he brought the dog upstairs to leave me money to go buy dog food for our shared hound, and left the whole thing. He called me, wondering if I could call a gas station with my credit card number. I said "I have a better and simpler idea." I called Kristy, and she was there within 20 minutes, pulling her Ford truck up beside his, with a $20 bill that she didn't want him to repay, just give her a hug and tell his folks she loved us all.And that is what I choose to remember, even though I can't forget how she died.What I have gathered so far is that the weapon was a TEC-9 assault weapon, and she was shot on the left side of her abdomen. I have seen a lot of left-side-abdomen wounds that the victim recovered from if they were inflicted with a plain old 9 mm handgun, but in 22 years of medicine, I only saw two people who were shot with assault weapons anywhere in the thoracic cavity who survived.This was already going to be a sucky holiday because my cousin Jeannette, who had me with her when her first child was born, and had me deliver her second child at home a little over 26 years ago, died suddenly last February. We named the baby girl together, after our great-grandfather Riley, who only I was old enough to remember...yesterday was her birthday.I'm having a rough week. Bear with me.

Do what you have to do, get out the environment for a bit, ale a pass on Thanksgiving -if you feel like it.

Maybe take a short road trip to nowhere in particular...