Keep your head down, Private 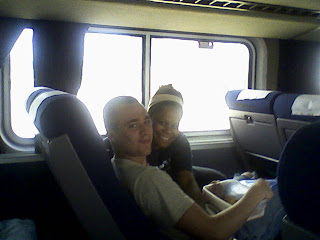 Sometimes I just get overwhelmed by the people who make up this country, and this couple brings tears to my eyes just thinking about them. They boarded the train sometime between when I fell asleep and when I woke up at 2:00. As the morning wore on, we started talking.

He has just joined the National Guard. Recently. In this climate.

The fact that there are people who are willing to step up blows me away in the best of times. But in this climate, it moves me to tears. Especially in the context of this ungodly clusterfuck of a war in Iraq. I asked him what motivated him to do it with so many reasons not to. Especially given the obviously loathing that he and his beloved both feel for this war criminal president. What his answer boiled down to was there are things more important than self and country is one of them. Our military is strained to the point of breaking and he is young and fit and capable and he appreciates the opportunities this country has given him, and he is willing to give something back. No matter who the president is.

I didn't cry in front of him, but I am on the verge of doing so now, as I type this in a coffee shop in St. Louis, waiting for my train to Kansas City. As I got off the train, I wished them a long and happy life together, and told him "Keep your head down, Private."

I hope like hell when his inevitable deployment rolls around, he remembers that advice and comes home safe to his beloved. This country needs more young people like him...and his bride.