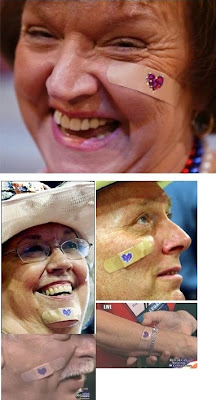 The GOP can go piss and moan about GENERAL Wesley Clark calling it like it is all they want so long as it is out of my earshot.

Try it around me and get a face full of claws.

They opened that can of worms with this stunning display of respect for the sacrifice of those who serve. We know exactly what they think - service is only to be respected if a republican offers himself up, Democrats are just phony soldiers.

Well, Fuck them and their faux outrage.

When the GOP condoned this and didn't condemn it - on the floor of their convention - they lost all right to pretend to be outraged when that big, fat chicken came home to roost - and now it's crapping all over the car parked underneath the tree. I say "so fucking what?"

The Chickenhawks made their fucking featherbed. Let them lie in it.

Hey, can I join in? Because there's no shortage of wingnuts out there who opened this can of worms up a long time ago...well, not so long ago.

And, well, what's one Veteran criticizing another Veteran worth to ya?

Let's not forget what old Bob Dole had to say:

Aug. 25, 2004 Yesterday, Bob Dole joined Republican critics who claim that Democratic presidential nominee John Kerry doesn't deserve the Purple Hearts he won in Vietnam. Dole said, "three Purple Hearts and never bled that I know of. I mean, they're all superficial wounds." But is bleeding even necessary? How do you earn a Purple Heart?

Yeah, I think the wingnuts can tamp down on their faux outrage here...