Let's talk about off-shore drilling for a minute 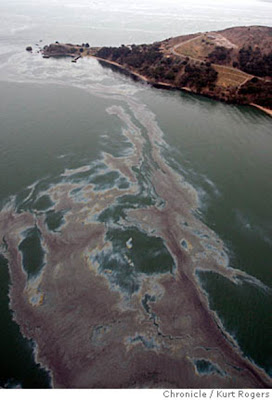 When McCain flip-flopped on off-shore oil drilling last week, my mom called me. "Wet Start just lost even his republican support in California," she said before I had 'hello' out of my mouth. "He wants more off-shore drilling, and California is still pissed over the Santa Barbara spill that happened forty years ago. San Diego is going to Bob Barr." She was engaging in a bit of hyperbole of course - but now you know that I come by my passion for politics honestly.

In January 1969, a gas blowout occurred beneath a Union Oil drilling platform located about six miles off shore from Santa Barbara. Over the next eleven days, 200,000 gallons of crude oil would bubble to the surface, and the slick would eventually cover 800 square miles of ocean and affect 35 miles of coastline. Shore birds such as plovers and willets fled the area, but diving birds became oil-soaked and many died.

Nearly 3700 birds were estimated to have perished because of contact with oil. Aerial surveys a year later found only 200 grebes in an area that had
previously drawn 4000 to 7000.

Marine mammals were poisoned. For weeks the tides brought in the corpses of seals and dolphins, and gray whales who traversed the channel as part of their regular migratory route to their calving grounds in the warm waters off the Baja peninsula avoided the area.

The spill was such an ecological disaster that the very first Earth Day grew out of it a year later.


My Mom wasn't the only one who remembered the Santa Barbara spill.

To the West, drilling rigs also operate off the Pacific shoreline near Santa Barbara, Calif., but to many residents, they are vile reminders of a 1969 blowout on an offshore rig that spewed a giant oil slick into the Pacific. The ecological disaster contributed to the creation of Earth Day the following year.

"It still has an impact on our consciousness," says Linda Krop, an environmental attorney in Santa Barbara. "You don't see oil on the beach any more but it's very high in people's awareness and their concern about any more development."

The experiences in California and the Gulf Coast states offer contrasting case studies as $4-a-gallon gasoline accelerates calls for vastly expanded offshore drilling to boost U.S. oil and gas supplies. Offshore drilling is currently permitted off four Gulf Coast states, Alaska and a sliver of California but is banned elsewhere in the United States.

President Bush and presumed Republican presidential nominee John McCain reopened the national debate over offshore drilling last week by calling on Congress to lift the ban that prohibits new oil and gas production off most of the East and West coasts and a section of the Gulf Coast below Florida.

The proposals generated a fierce push-back from many Democrats and environmental groups, who accused Bush and McCain of being in the pockets of Big Oil.

McCain's rival, Sen. Barack Obama, noted Friday in Jacksonville that McCain had once favored the ban and charged McCain with violating the "bipartisan consensus" that had protected Florida's coastline for decades.

It certainly puts politicians on the horns of a dilemma - especially those who have been playing the game for a while now, and who chose to ignore the pleading of people like me, beseeching them to deal with the problem of peak oil before it dealt with us.

Simply put - we can't drill our way out of the trouble we are in. It would take a decade for the remaining hard-to-get-at oil fields to bring products to market. I am of the opinion that we would be better off enacting conservation measures in the near term and working on alternative energy sources in the long term, because you don't get out of trouble by applying more of the same thinking that got you into trouble to begin with.

We have the technology to mass produce Hydrogen fuel cells and battery capacity is coming along nicely after several years of being stuck at the Lithium ion stage. All over the west, wind turbines are replacing oil rigs, and those rigs stand silent and rusting over stripper wells across the land.

I listen to politicians yammer on and on about stop-gap measures that would have little or no impact on the price Americans pay at the pump and I shake my head in disbelief.

Until someone takes the bold step of acknowledging that Peak Oil not only exists, but Hubbert was an optimist and we are on the downhill side of the bell curve of production, all of their pissing and moaning amounts to just that...pissing and moaning and it's all for naught.