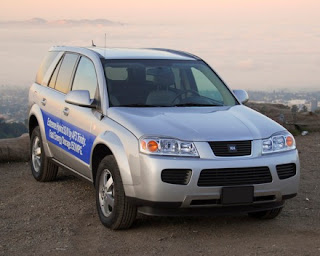 Long-time readers know that while I am a huge fan of alternative energy, I have been a real wet blanket on the issue of electric cars and solar and wind power, because I have the bad manners to keep pointing out that we have gone about as far as we can until our storage capacity technology catches up with our ability to generate power, and the same issues with our lagging battery technology created the problems with plug-in hybrids and electric cars. Then I really cause squirming when I point out how nasty spent batteries are, chemically and environmentally. Sometimes I'm no fun at all, because I refuse to play when "well, we'll solve that problem later" is a part of the game. I like my "knowns," thanks, and don't want rogue variables mucking about in my equations. I'm cranky that way.

A company in Washington state, AFS Trinity Power, has made a battery advance that makes the plug-in hybrid practical. 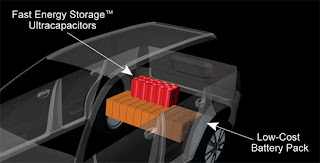 Lithium ion batteries, the best rechargeable batteries that we have developed thus far, wear out rather quickly. THink about your cell phone - when it was brand new, you could go two or three days without recharging it, right? But by the time it's six months old, you are recharging it every night at bedtime. That is because the battery starts wearing out immediately. That fact has hindered the development of plug-in hybrids that can run on pure electric power - but AFS Trinity has found a way around that. They have developed ultracapacitors that provide bursts of energy when the car is accelerating, thus protecting the battery from the damaging effects of sudden power drains.

This seemingly-simple advance is a lightbulb-moment and changes the hybrid landscape dramatically and instantly.

Trinity decided that they had something worth pursuing with their ultracapacitor array, so they made two prototype vehicles with off-the-shelf components, and used them to modify two Saturn Vue Greenline hybrid SUV's. They achieved their goal in six months time - at a cost of $3 million per vehicle - and unveiled the new technology at the annual auto show in Detroit.

The cars can travel forty miles on a single charge, which takes about one dollars worth of electricity. After that, it switches to an efficient gasoline engine and recharges the battery while driving, returning some of the energy being used to the battery pack. The prototypes get a little better than 150 miles per gallon. The cars have zip to them, too. They can go from 0-60 faster than a gas engine, and can achieve a top speed of 87 mph on electric power alone. Compared to other hybrids, the HX wins in every category. 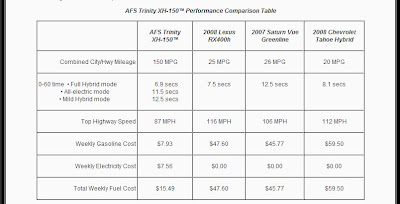 (Click to enlarge)
The XH-150 (extreme hybrid, 150 mpg) was introduced five months ago, and has completed a Washington-to-Washington round trip to raise awareness, yet no domestic automarkers have jumped on board and snapped up the rights to the technology and started cranking out XH SUVs. discussions with U.S. automakers are "preliminary"

The prototypes cost $3 million apiece, but if 100,000 units were produced, the additional cost-per-unit would be about $8,600 - a cost that would pay for itself after about 100 tank fulls, assuming a gas price of $4.00 per gallon, and an average gas tank size of around 20 gallons.

Furia says that if the company can't ink a deal with a major manufacturer, he will find another partner to make the cars for the firm, based on Trinity's specifications.

"I want to see these cars on the road," he said.