The window is closing in Myanmar 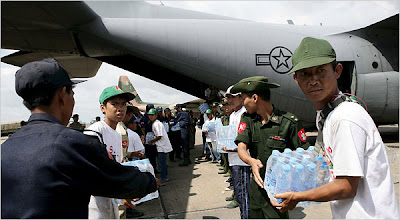 I am going to be frank and brutal in this post, and I warn you now that you might want to skip this one if your stomach is easily turned. But I have some training in mass casualty response and I know what is coming because the military junta is incompetent and corrupt and inept, and am tempted to paint a horrific picture.

The second wave of death is on the horizon and will be upon the survivors in less than 72 hours. Cholera is coming and it is bringing some friends, and a whole lot more people are going to die horrible deaths. U.N. Secretary General Ban Ki-Moon has dropped all pretense an bluntly criticized the military junta that runs Myanmar.

In unusually blunt language for a United Nations leader, he said, “This is not about politics, it is about saving people’s lives. There is absolutely no more time to lose.”

The sharp comments from Mr. Ban came on a day when the authorities in Myanmar allowed a United States military aircraft to land with relief supplies Monday, crossing a barrier that has prevented the delivery of large-scale aid to more than a million victims of the May 3 cyclone, even as state television has put the death toll at 31,938 with 29,770 people missing.

Mr. Ban said that he had been trying for four days without success to reach the country’s senior general, Than Swe, and had sent a second letter to him Monday alerting him to the United Nations’ efforts to provide help and its need for “greater access and freedom of movement.”

He said too that the countries of the region have “a special responsibility and a special role in securing the full cooperation of Myanmar’s government.”

John Holmes, the undersecretary general in charge of emergency said that while there had been “slight progress” in granting visas to relief workers, only 34 of more than 100 applications had been approved.

Children and the elderly can be dead in less than 48 hours when cholera strikes. The diarrhea that is a hallmark symptom of that and many other waterborne diseases results in dehydration that can kill quickly, especially the very old and the very young. As bodies decay and contaminate water supplies, the disease spreads, and the death snowballs as the disease claims ever more victims.

The expat grapevine is atwitter with speculation that the junta is divided and the devastation of the cyclone might provide the impetus for change, whether it be minor change sparked by a change in generals at the top or a liberal opening that would bring Aung San Suu Kyi into the political process.

With the exception of a purge of officers in 2004, the military junta that rules Myanmar has never shown any signs of division or other cracks in the facade. No one knows how this is going to play out, but how it eventually does is going to have the potential to set the political tone in that country for the next two decades.