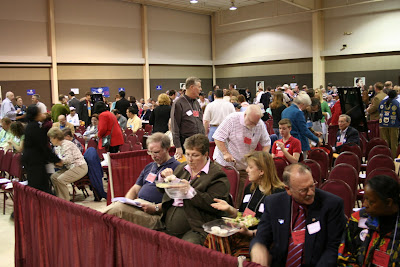 So on Saturday I dipped my toe into state party politics for the first time, and I got to see how the sausage gets made.

There is more to this democracy thing than just showing up at the polls to vote, you know…a whole hell of a lot more.

The state convention is where we select the members of the DNC who will represent Missouri’s issues to the national party, and it is where the at-large delegates are selected who will attend the national convention in Denver in August in support of either Hillary Clinton or Barack Obama. It also serves as a launching point to get us energized and fired up and ready to unite behind the eventual nominee and take on McSame and the republican fear machine that is rolling at us, preaching doom and gloom and the necessity of ever more war, drilling for oil in ANWR and of course, the gospel of tax cuts. They are going to pay for their folly with yet more tax cuts. Fortunately, the vehicle they like to think of as a Mack truck is actually more akin to a Ford Pinto, and reality is coming up on 'em fast from behind.

Technical issues with my firewall prevented me from doing the live-blogging from the convention that I intended, so I shifted gears. I took a lot of pictures and talked to a lot of people and tried to learn something. 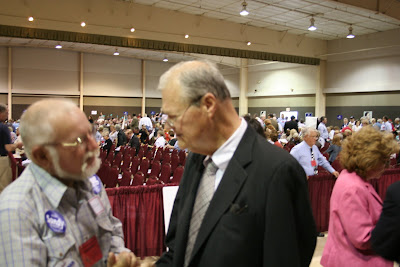 The Missouri Democratic Party is the oldest continuously-functioning political organization west of the Mississippi River, and it is effective. The two biggest urban areas in the state, St. Louis and Kansas City, are both Democratic strongholds and a testament to the history and resilience of the Democratic party in this swing state.

I did have the opportunity to spend a little time with Jack Cardetti and make the case to him that the party needs to reassert itself in the rural areas - especially in the northern tier. They might not make any inroads in the bible-college saturated southern counties, but the Missouri Sixth? Nuh-uh. Get some damned party representation up there in Bethany and Princeton and Trenton and Unionville, and do it right damn now.

I am fond of saying that the population isn’t dense up there - but neither are the people.

Last week, as I was making my plans for the convention, I called my father-in-law who had turned into a republican for a while, but came back to the Democrats this year, and I asked him if he could ask anything of the state party, what would it be? He answered me immediately. He said "why can't I pick up bumper stickers and signs in [the county seat]? Tell 'em nobody's gonna vote for 'em if they don't bother to ask."

Well, my father in law is one of my heroes, and he has the medals, including a Bronze Star, earned in Korea to prove he's a hero in that sense of the word, too. So I made a pest of myself, bringing it up every time Jack Cardetti was anywhere near me, and then I hooked up with a reporter from the Times-Tribune in Grant City, and we pestered him together. (Meeting her was kinda like meeting the cool cousin you didn't know you had at a family reunion.) 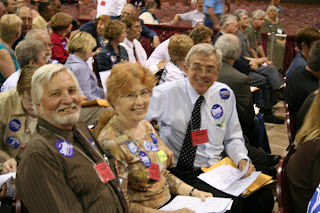 Anyway, I have no intention of shutting up about the lack of party presence up there so long as it is lacking. And not to be the cranky old granny lady shaking her cane and yelling at the kids to stay off her lawn...but the folks at the state party are younger than Bridget (that is my new friend's name) and I, by enough years that they have no personal recollection of the strong Democratic history that runs through that part of the state. History is on our side, and the state party needs to remember that. The only reason Democrats lost control of the statehouse in 2000 was because of a perfect storm...term limits (what a lousy idea - there is no institutional memory now, no legislative agendas, just strongarm tactics) kicked in and was coupled with the republican presidential candidate taking the state and carrying down-ticket repubs along on his coattails. It's true - you can look it up. That area up there is not reliably red - Kay can take Sam Graves, and she is going to. He is running scared and everyone knows it. That is why he has gone negative this early on. Seven years of goose-stepping with Bush is going to take a huge bite out of his ass.

The Democratic party also has an advantage they may not realize - there are enough old-time Roosevelt and Truman Democrats left up there in the Sixth who still remember when the WPA brought jobs and electricity to the countryside, and they remember the howling the republicans did about that back then. There are also enough young people who have been negatively impacted by the last eight years of this republican president and the last four years of our current republican governor - Blunt gutted Medicaid and then Graves turned around and voted against SCHIP - that the Missouri Sixth can be flipped back, and if history is any indicator, a party change is due. Provided the opportunity doesn't get pissed away.
Posted by Blue Girl, Red State at 5/11/2008 10:07:00 PM