Bicycle Sales on the Rise

Even though almost no one rides a bike to work, the possibility that more people will choose alternative methods of commuting means an increase in bicycle sales:

Bicycle shops across the country are reporting strong sales so far this year, and more people are bringing in bikes that have been idled for years, he said.

"People are riding bicycles a lot more often, and it's due to a mixture of things but escalating gas prices is one of them," said Bill Nesper, spokesman for the Washington. D.C.-based League of American Bicyclists.

"We're seeing a spike in the number of calls we're getting from people wanting tips on bicycle commuting," he said.

The League of American Bicyclists is promoting Bike-to-Work Week this week and Bike-to-Work Day on May 16. Nesper said he expects a record number of people will be pedaling this year.

There's almost nowhere for the numbers to go but up: The group says less than one-half of 1 percent of Americans ride a bike to work.

The increase in the number of people using bicycles for transportation is being resisted in some areas:

The students are members of an environmental club at their high school that had raised $2,000 and wanted to use the funds to donate a bike rack to the school. However, they were told that the school did not want to promote cycling due to safety concerns, and thus the gift was rejected. Ironically enough, the rejection came on Earth Day.

Fortunately, these enterprising high schoolers didn't just sit on their heels. No, they came together and organized the following protest: "more than 50 students rode their bikes to school, commuting in pairs and groups. After studying up on state biking laws -- and carrying copies with them -- the students legally tethered their bikes in conspicuous clusters around lamp posts, trees and other poles dotting the circular drive in front of the school." The students also delivered a letter to the principal. So what was his response?

Well, it wasn't very positive. In a letter he wrote "In as much as the district provides courtesy busing to students who live within walking distance of the high school, because of the danger on Garretson Road, it does (not) make sense, in my opinion, to promote the riding of bicycles to school."

Functionality is a major factor in determining what kind of bicycle will work better for urban commuting. A Swedish design firm has designed a bicycle designed to allow for urban use: 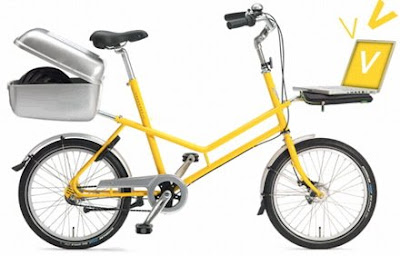