This has been a long time coming 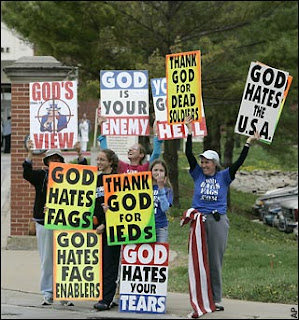 The Topeka Capital Journal reported yesterday that a Federal Judge in Maryland has slapped liens on real property owned by the Phelps phuckheads and if the action is upheld, Westborrough Baptist Church and the Phelps-Common Law Office could be seized and sold to start satisfying a $5 million judgment issued by his court for damages awarded to Albert Snyder, the father of Marine Lance Corporal Matthew A. Snyder whose funeral was protested by that passel of vermin.

A lien is a legal hold placed on property that prevents title from being transfered for any reason so long as the judgment remains in effect. Two members of the group, Shirley Phelps-Roper and Rebekah Phelps-Davis, to post bonds of $125,000 and $100,000 respectively, by May 5. If they do not, he will stay the order that prevents their property from seizure.

Shirley Phelps Roper is also facing criminal charges in Nebraska on charges of contributing to the delinquency of a minor involving the actions of her son when the group protested the funeral of Nebraska Army National Guard Spc. William "Bill" Bailey in Bellvue, Nebraska last June. In that protest, she encouraged her son to trample an American flag, in violation of a Nebraska state statute that criminalizes flag mutilation. Encouraging a child to break the law is indeed contributing to the delinquency of that minor, and she was arrested. "Every symbol of the rebellious, doomed America must necessarily be disrespected. We did our duty today to our God and fellow man. Our job is to cause this nation to know her abomination. The thing they worship, the flag, is worthless. It's a piece of cloth," she said after her arrest. She was released after posting a $150 bond.

But that wasn't the end of it - last week the Sarpy County prosecuting attorney decided to pursue additional criminal charges. The County argues that standing on the flag is tantamount to "fighting words" and "fighting words" are not protected as free speech. Using that as his basis, the county prosecutor has filed charges of disturbing the peace and negligent child abuse in addition to the charge of contributing to the delinquency of a minor.

I am all for crushing these people like the cockroaches they are - so long as we don't undermine our few remaining civil liberties in the process. They may not have any reverence for the Constitution, since the founders were so short sighted as to not include an article setting forth the yearly open season on fags, but I do. So we have to keep it on the up-and-up and get 'em when they cross existing lines. We can't go moving them around and end up boxing ourselves in. The First Amendment and the Constitution are too important to start picking away at just to put a few dozen sociopaths away from decent folk.

***Heh. Great minds. I see that Logan Murphy at Crooks & Liars used the same picture. I took the shot of the church facility out - it chopped the post up too much and I was too lazy to photoshop 'em together...None the less, I'm glad C&L is on the the case exposing these nutcases as they get their comeuppance. Speaking of which, I'll see his Rick Roll'd link and raise The Chasers...