In a moment of unusual stupidity, gall, and otherwise idiocy, Secretary of State Condoleeza Rice plays to the base and makes America look bad again:

BAGHDAD — Secretary of State Condoleezza Rice mocked anti-American cleric Muqtada al-Sadr as a coward on Sunday, hours after the radical leader threatened to declare war unless U.S. and Iraqi forces end a military crackdown on his followers.

Rice, in the Iraqi capital to tout security gains and what she calls an emerging political consensus, said al-Sadr is content to issue threats and edicts from the safety of Iran, where he is studying. Al-Sadr heads an unruly militia that was the main target of an Iraqi government assault in the oil-rich city of Basra last month, and his future role as a spoiler is an open question.

"I know he's sitting in Iran," Rice said dismissively, when asked about al-Sadr's latest threat to lift a self-imposed cease-fire with government and U.S. forces. "I guess it's all-out war for anybody but him," Rice said. "I guess that's the message; his followers can go too their deaths and he's in Iran."

Was it too cute to just say "bring 'em on!" or did you just think, hmmm...I'll make juvenile remarks about a sworn enemy of the United States who just happens to hold a sword over the head of thousands of vulnerable, exhausted US troops who are going to be in harms way if the Mahdi Army comes out of hibernation and resumes attacking our forces?

The schoolyard taunt doesn't work when you consider that Sadr is not a military man in any way, shape or form--he is a religious figure, a cleric. He is a spiritual leader and organizer, and his followers do not follow him because he risks death. They follow him because they have a far more sophisticated view of who is a leader and who is not a leader than anyone in the Bush Administration can fathom right now.

I mean, really. How fucking stupid can you be?

Pale Rider hits the nail on the head when he stresses that Sadr is not a military man, but a cleric, and that fear of death is unlikely to dissuade his followers and cause them to lay down arms. Quite the opposite is the case, in fact.

Last May, when Sadr emerged from hiding after four months of laying low, he emerged wearing a funeral shroud, signifying that he is willing to die, and indeed, expects to be martyred.

Within months, Shi'ite militants were wearing shrouds during street demonstrations.

Consider that most militia fighters are anonymous, the stereotypical black-clad, masked gunman.

Now look at the followers of Sadr. They show their faces and they wear funeral shrouds: 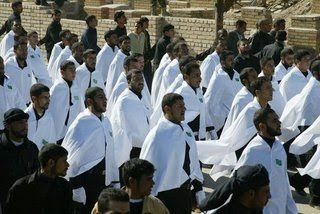 These are not actions to be taunted, mocked and ridiculed. Just the opposite, in fact. This should be taken quite seriously.
Posted by Anonymous at 4/20/2008 10:45:00 PM