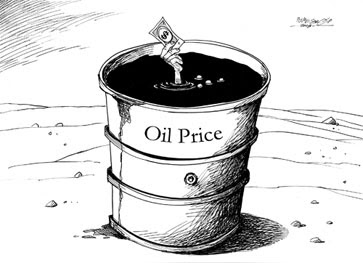 The price of U.S. crude topped out at $103.05, before settling down to $101.84 after Turkey withdrew troops from Iraq on Friday. But not to worry, the dollar slid further, now trading at a record $1.52 against the Euro.

Make it a trifecta of bad economic news - The Dow closed down 315.79, or 2.51%. February marks the fourth consecutive month that the Dow has lost ground, the worst performance since 2002. Prices for municipal bonds, bank loans and high-yield debt also tumbled.

Well, that's original...er, no, maybe not...a White House aide that served as a liaison to religious conservatives has resigned his position after it was discovered that most of the columns he had penned for his hometown newspaper, the Ft. Wayne News-Sentinel were plagiarized. He was busted by former Fort Wayne News-Sentinel columnist (and current DFH blogger) Nancy Nall about 7:30 Friday morning. By early afternoon, he had tendered his resignation. As Atrios might say...WHEEEEEEEEE!

The feckless thug The aWol coward will veto the Intelligence Authorization Bill next week. Why, you may ask, will he veto the legislation? Because it makes the Army Field Manual the interrogation standard for all government interrogators and outlaws waterboarding torture. What a guy...

If you liked the subprime mess, you are gonna love the impending credit-card crisis...As the home mortgage crisis shows no signs of abating, while wages stagnate, more and more people are falling back on credit cards to make ends meet. This tactic might forestall foreclosure, but it is likely to leave the family with little or no resources when the inevitable happens.

From the inimitable Oliver Willis (like Kryptonite to stupid) we learn that McCain's spiritual adviser wants to imprison adulterers. Oliver asks the obvious question...Will he start with John Sidney McCain? (With a tip o' the hat to Pam's House Blend)

1% doesn't sound like much - unless you are talking about the percentage of the United States population that is incarcerated. Then it sounds like we have lost our collective freakin' mind. Can we get over our obsession with punishment and stop locking people up for consensual crimes? WFB and Ron Paul at least got it right on the idiotic war on drugs. I live in the inner city, I can tell you with absolute certainty that we not only aren't winning it, it is unwinnable - at least the way they are fighting it.

You could have knocked me over with a feather when I woke up this morning to learn that the Department of Agriculture took the stunning and unprecedented step of refusing to cooperate with the GAO. "You are hereby instructed not to meet with any member of the (Government Accountability Office) today, or until this matter is resolved," Michael Watts, a top attorney with the USDA wrote in an email to employees. What kind of egregious behavior precipitated this? Were they holding a rave in the conference room and making paper hats of the financial reports? No. Turns out they were were seeking information for an ongoing audit of Agriculture's civil rights office and the handling of discrimination complaints. To be precise, they were investigating allegations that the department had previously provided false information for the audit. Pale Rider has more.

Northrup Grumman and Airbus have secured a $30-40 billion contract to replace the Air Force's aging fleet of air-refueling tankers. Congresscritters in 20 states are heaving sighs of relief - they have brought home the job-creating bacon in an election year and a tight economy - Pat Roberts and the rest of the delegation from Kansas, and the Senators and Congressmen from Washington state are not among them. Boeing was the big loser and Boeing is a huge employer in both states.

Did no one ever tell this woman not to borrow trouble? Lots of people are going to call me a bad Liberal for this, but oh well...I'm going to go there anyway. Cal State - East Bay has terminated a Quaker math instructor after six weeks on the job because she inserted the word "non-violently" into her state-mandated "Oath of Allegiance" to the Constitutions of the nation and the state of California. If she was being drafted into service, I would soooo have her back. But since the oath is not for military service, but state employment, and the odds of Cal State - East Bay asking her to take up arms and fight are virtually nil, I think she is just being silly and have no sympathy at all. My grandma could never understand why they call it common sense when it is so rare, and she was so right.