Another Agency Decimated by a Political Hack 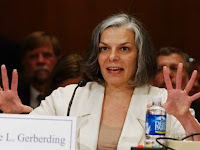 Julie Gerberding has trashed the CDC, and spent a few billion of your dollars doing it. She took an agency that worked, that was the global gold standard 0f public health, and demoralized the staff, drove off the top talent, changed the structure of the agency so it now has a centralized command structure, and, in general, ruined it. (This is considered "success" by the Bush cabal.)

Chen aggressively expanded vaccine safety measures to include a linked nationwide database of 3 percent of the country’s population that could be used to investigate possible harm from vaccines. The database was key to the 1998 discovery that a new rotavirus vaccine, produced by Wyeth Co., apparently caused a severe bowel disorder in about 1 in 10,000 infants who received it. The vaccine was withdrawn.

Chen rubbed some of his superiors the wrong way, partly because of a blunt speaking style but more fundamentally because of his willingness to put the interests of public health ahead of those of the CDC. It was a combination of personal and philosophical conflicts that led to him being removed from his job. He now works in HIV prevention at CDC. [emphasis mine]

Vaccine safety now goes through Gerberding's office, and consensus seems to be that doing so has been disastrous.

The CDC had always been independent, no matter who was in the White House. It is, after all, the nations public health service. Emphasis on PUBLIC. As in you and me. Us. Our kids, and our neighbors and our friends and our coworkers and the people who work at Costco and the Kansas City Chiefs and the cop on the beat and the bartender and the butcher and the baker. Us. The people. In the past, that is where the CDC's focus was.

When was the last time an epidemic swept this country?

Our relatively disease-free existence didn't just happen, you know. It came about because of the hard work of the public health system, led by the CDC!!! It happened because dedicated men and women have lived very focused lives, concerned only with the health and well-being of the people they serve.

Robert Davis is one of the top epidemiologists in the world, and he only lasted one year at the helm of the safety office. He couldn't abide the politics - or answering to an unqualified political hack of a scientist that Gerberding put in charge because she wanted a "Yes, Ma'am." I will let him have the last word.

“What’s really sad about it is, you had a few people with the power to eviscerate what I think most of the American public wants,” Davis said. “To me that was really, really shocking.”
Posted by Blue Girl, Red State at 3/04/2008 12:14:00 PM