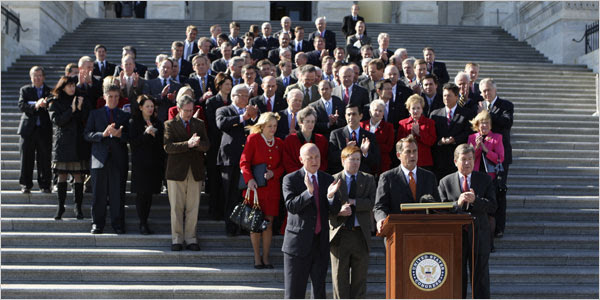 So many feckless morons, so little duct-tape and so few gunny-sacks...
John Boehner and most of the Repugnant members of the House (above) showed their true loyal-Bushie stripes on Thursday when he stamped his wittle foot, said "follow me" and led a whole gaggle of petulant fucks who feebly attempt to pass themselves off as legislators out of the House today when the majority party decided to vote to hold Joshua Bolton and Harriet Meiers in contempt of congress for their obstinate refusal to appear before the chamber even though they have been subpoenaed. “We have space on the calendar today for a politically charged fishing expedition but not space for a bill that would protect the American people from terrorists who want to kill us,” whined Boehner.

Fortunately for them, they found an empty lectern! Just waiting! Right there on the steps of the Capitol! So they could hold an impromptu presser! And decry the fecklessness of the Democrats! Who stubbornly insist the Constitution matters! And that the Congress is co-equal!

I gotta ask...Exactly what kind of Congressman abrogates his responsibilities and undermines his branch of government at the behest of a lame-duck failed president? (That is a rhetorical question.)

The only down side I can see to this histrionic snit-fit on the part of the Repugnant-Ones, staged so spectacularly by their imminently mockable and totally pathetic delegation is that they have to be let back in to the chamber after the recess.
Posted by Blue Girl, Red State at 2/15/2008 12:54:00 AM