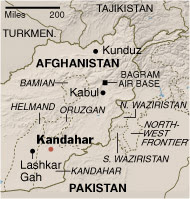 The worst suicide bombing in the history of Afghanistan occurred in Kandahar on Sunday, leaving at least 80 dead and 90 wounded. The attack, blamed on Taliban forces, appeared to target a local tribal leader and police chief who had "declared war" on the them.

The target, along with five of his security detail were killed. The attack occurred at a dogfighting event just outside the city that had drawn entire families of Afghanis from all over Kandahar province. Dogfighting was previously banned when the Taliban ran the country because it involves gambling, an activity that was prohibited under their fundamentalist rule. “This is the action of the enemies of our country,” said the Governor of Kandahar, Asadullah Khaled. “They do not let Afghans enjoy their lives and have a peaceful life.”


How's that Surge™ workin' out for ya? Ethnic Kurdish officials in Irbil are keeping their ethnic Arab residents on a short leash. Every three months, Arab residents have to report to an intelligence agency and bring their papers for proper vetting. So much for the blessings of liberty. I guess all Iraqis are equal, but in the new ethnically divided Iraq, some Iraqis are more equal than others, and how equal one is is determined by who is running things where you live. Great. Welcome to Johannesburg, circa 1978.

Hows that Surge™ workin' out for ya? II The fifth female suicide bomber so far this year blew herself up in an appliance market on Sunday, but this time there was no doubt that she was a willing participant. When wires were spotted under her clothing at a checkpoint she bolted toward the market. It is believed that she intended to target an Iraqi Colonel that was touring the area.

How's that Surge™ workin' out for ya? III - Remember what I told you last night about the 2000 coalition-allied and funded militia members who had abandoned their posts after an incident in which three Sons of Iraq civilian guard corps members were gunned down by American forces? Well, that was the second stand-down. Last night when I was posting, I forgot about this. Babil is the second province in which Sunni militiamen have ceased their cooperation with American forces. It happened in Diyala a week ago.

A military judge has overruled objections by the Government and will allow defense attorneys in the Hamdan case question Khalid Sheik Mohammed and six other alleged senior al Qaeda captives being held in seclusion at the Guantánamo Bay prison camp. Navy Capt. Keith Allred gave the U.S. government until Tuesday (Monday is a federal holiday) to establish an independent security arrangement to help lawyers representing Salim Hamdan gather evidence they say could exonerate their client. At issue is just how deeply involved the $200 per month driver with the third grade education was involved in the planning and execution of terror attacks. The prosecution maintains that Hamdan need not have belonged to the cells that plotted the attacks to have been part of the conspiracy to kill Americans, he is guilty by association. The defense argues that if Hamdan wasn't part of the plot, he should be found innocent of overarching conspiracy charges.

Hillary Clinton gave the most detailed response to questions posed about last weeks decision by the government to try six Guantánamo detainees in front of military tribunals, and to seek the death penalty for guilty verdicts. She would ask her Justice Department to transfer the detainees to either the civilian courts or regular military court system, instead of the current Kafkaesque "military commissions" that currently governs the fate of the detainees. The civlian court system handled the first World Trade Center attackers quite ably. They are in prison serving life, put there by a previous Clinton Justice Department.

[I haven't officially endorsed anyone since Richardson dropped out, but I will say this. I liked that answer.]

Reason number...hell, I've lost count why I eat a largely locally-grown diet, and sure as hell don't buy mass-produced ground anything. If it doesn't come from a steer we buy directly from a farmer or Four H member after the county fair season, or a deer we harvested; that we then have processed at a locker in a small town - we don't eat it. (Well, unless it's buffalo from McGonigles.) A meat-packing plant in southern California has been shut down, and a recall issued on 140 million pounds of beef, because the plant was processing "downer cows" that the USDA has deemed unfit for human consumption. It is believed that most of the meat has already been consumed, but hey, no worries! Most of it went to school lunch programs!

[Can we get a USDA inspector back in every meat processing plant please? Good grief.]

Researchers at the University of North Carolina - Chapel Hill have released a study that assesses human impact on the oceans and the results are chilling. The research was conducted by a team of researchers from the US, Canada and Great Britain. In all seventeen areas across which data was collected and analyzed,the human impact was obvious, and in many areas the threats to the oceanic ecosystems overlaps and the impact is compound. "The big picture looks much worse than I imagine most people expected," said lead scientist Ben Halpern at the National Center for Ecological Analysis and Synthesis at the University of California, Santa Barbara.

Two days in a row, an organization of lawyers has made me swear I will continue my moratorium on attorney jokes. The National Association of Attorneys General has taken the position that the Earth is warming, the climate is changing, the ice caps are melting, and states attorney's general need to educate themselves about it. A vast majority of climate scientists believe that energy is the biggest contributor to global greenhouse gasses, and invariably, as the effects set in, the lawyers will be involved. As the attorneys that represent the citizens of their states, it stands to reason that state AG's should be able to adequately represent the citizens of their states when the torts hit the fan.