One Dead In Burning Of US Embassy in Belgrade

All staff are accounted for; likely an employee (Serb national?) or a rioter.

If true, the significance of the fact that the Serbs seized the US flag flying over the Embassy, pulled it down and or burned it is huge.

Preliminary reports say the Ambassador was not in residence, however. But the Marine Guards were inside.

Did we lose the flag as well as the Embassy? Do we have troops in theater? As in, do we have a carrier group in the Med? Do we have adequate forces to evacuate all Americans?

I do know there are US troops in Kosovo, and what their status is--and what they're armed with--now becomes critical.

THIS WAS PROBABLY NOT A GOOD TIME TO HAVE AN OVERSTRETCHED MILITARY, I would hazard to guess.

Serbian anger at Kosovo's declaration of independence last weekend boiled over today, and about a thousand protesters broke off from a larger peaceable demonstration and overran the American embassy in Belgrade.

The Ambassador was not in residence, and the Embassy was closed this week, in anticipation of civil protests in the wake of Kosovo formally declaring independence. The embassy guards, however, all active duty Marines, were in the facility.

Protesters went over a first-floor railing, entered the embassy and set several rooms alight. One protester scaled the facade of the building and ripped down an American flag, which was later burned by the demonstrators. (No word on whether it was THE flag, since the Ambassador was out of the facility, it might not have been...and only a protocol wonk would care, actually...)

Demonstrators cheered as the attackers, some of whom wore masks to conceal their faces, leaped onto the building's balcony, waving a Serbian flag and chanting "Serbia, Serbia!" A convoy of police firing tear gas was able to disperse the crowd, but when the demonstrations started, there was no outside police presence protecting the embassy facilities.

The unrest wasn't confined to Belgrade, however. NATO troops have sealed the border between Serbia and Kosovo after hundreds of angry Serbs torched customs and police facilities at the border crossings in the towns of Jarinje and Brnjak, which were manned by UN customs officials and Kosovo police.

The border closings will undoubtedly infuriate both Serbia and Serbian Kosovars as it cuts off ethnic Serbians in the north of Kosovo from greater Serbia, which the ethnic Serbs insist they still belong to. 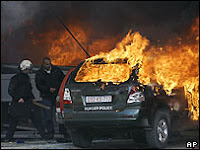 Protesters arrived at the border crossings in convoys of cars and buses in what a BBC correspondent who witnessed the demonstrations said was an obviously coordinated and well orchestrated action.

Kosovo police and United Nations customs officials retreated to a nearby tunnel and as the crowds of Serbian protestors used bulldozers and explosives to demolish buildings at the border crossings. The Kosovo police called on NATO led K-For troops to seal the border and regain control of the situation.

Slobodan Samardzic, Serbia's minister for Kosovo, said that his government "intended to take control of the customs posts" in order to establish what he called the "full authority of Serbian statehood." The strident pose being struck by Serbia right now makes me nervous about how well they will accept a 2,000 strong EU police and justice mission that is shaping up now and will be launched in coming weeks.

The attacks at the border are at least as significant as the embassy protest - they set the international community, at least all the nations that have recognized Kosovo's independence, on a collision course with ethnic Serb Kosovars, as well as the Serbian government, and possibly Russia, too.

I do know one thing for certain - this is a really bad time to have an overstretched military, and an administration that doesn't do diplomacy.
Posted by Anonymous at 2/21/2008 04:49:00 PM

Email ThisBlogThis!Share to TwitterShare to FacebookShare to Pinterest
Labels: rioting, Serbia, US Flag