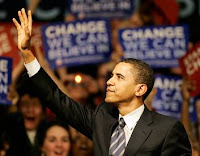 Barack Obama showed the world - and more than a few doubters - today that his MO ain't faux by making a clean sweep of the nominating contest in three states - Louisiana, Nebraska and Washington - and in all three he won by wide, decisive margins. In Nebraska and Washington, he won by a 2-to-1 margin over Senator Clinton, and in Louisiana, with 2/3 of precincts reporting and the vote still being tallied, he was leading 53% to 39%, and projected to win. Every state saw Democrats turning out in numbers that were roughly double the 2004 turnout.

"Today, voters from the West Coast to the Gulf Coast to the heart of America stood up to say 'yes we can'" told a cheering crowd of Democrats at the Jefferson-Jackson dinner in Richmond, Va. "The stakes are too high and the challenges are too great to play the same old Washington game with the same old Washington players and expect a different result," he told the crowd of loyal Democrats. "People want to turn the page. They want to write a new chapter in American history."

With 158 delegates at stake, and Obama winning so decisively, he certainly narrowed the delegate gap. Going into todays contests, Obama narrowed the lead held by Hillary to a less-than-100 spread, going into a week where he enjoys strong support in states that go to the polls over the next few days. Maine will hold caucuses on Sunday, with 24 Democratic delegates at stake. Tuesday, it's the Potomac Primary, with Washington D.C., Maryland and Virginia holding primaries. It is conceivable that Obama, with decisive victories in two or more of those states on Tuesday, could pull even in the delegate count.

On the Republican side, McCain was bitch-slapped by Kansans who went for Huckabee by a humiliating 60% to 24%. Here is what I want to see in Kansas: The county numbers. I want to see how Leavenworth, Geary, Riley and Sedgewick counties voted, and how overall Democratic votes stack up against overall Republican numbers. Those are the four counties that are home to the states three major military installations - Forts Leavenworth and Riley, and McConnell Air Force Base. In 2006 the military vote in the KS-02 (both of the Army Forts are in the 02) didn't turn out for the incumbent conservative Republican, former Olympian Jim Ryun, and the district is now represented by Democrat Nancy Boyda. I keep telling anyone who will listen that the service personnel most likely to vote are the ones most likely to have families - and when they have kids in school, they vote local, not absentee back home.

If Huckabee beat McCain in those counties, he has to reassess his level of support among military personnel. I don't think it is half as strong as he has tried to portray it to the media and the masses, but the numbers will tell the tale.

McCain had a rough day - just two days after he managed to muscle aside Mitt and his millions, he was humiliated in Kansas and it was followed up with additional repudiations in Louisiana and Washington, with Huckabee leading in both states.

I find the psychology of Huckabee and his voters fascinating. There is no way he can win the nomination. He trails by more than 500 delegates and he has been, for all intents and purposes, mathematically eliminated. Yet he forges on, and his supporters continue to vote in droves, and probably in defiance, of the McCain candidacy. Conservatives really, really hate him. Couple that vehement hatred with the uncomfortable feeling that it's 1996 all over again, this time with a bad candidate.
Posted by Blue Girl, Red State at 2/09/2008 11:26:00 PM