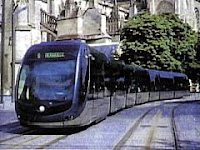 I am very sorry for posting this a mere two hours before the meeting convenes, but I promise to not only be more prompt, but to develop a widget in the sidebar that will take you to the latest KC light-rail updates and information...

Apology rendered and promise made, I just want to add a plea to all who care about mass transit issues in this city to please turn out for these meetings.

The time is right for a train. Gas prices are killing American families. Kansas City is a sprawling metropolis. A friend of mine drives from Lenexa to Lee's Summit five days a week in a four-cylinder, stick-shift Kia. When gas prices first hit three bucks a gallon and I stopped driving in the city and started using public transportation, she mocked me and gave me no end of grief. Now that the reality of three-dollar gasoline is setting in, I am looking a lot smarter, she is feeling contrite...and bitching about no immediate plans to connect the 470-435 suburbs via a rail link...and this is me doing the "I told you so! Dance."

Now - about tonights meeting...I lift this directly from the KC Light Rail website...

The ATA will host the first public meeting of Phase II of the Alternatives Analysis tonight. The agenda is here and the scoping booklet is here. This is your chance to provide your opinion the final route between the Plaza and I-29.

The facility is directly accessible from ATA route #28, which terminates at 9th & Main or Blue Ridge Boulevard (or free transfer from MAX at Crown Center). You can also use the Trip Planner.

And what the hell? I lifted this from Let's Go KC Alliance for Transportation Choice:

The long process of studying and formulating an official light rail plan is moving into a second phase of public meetings. The next opportunity for you to lean more and voice your own opinions is Wednesday, February 27 from 5:00 p.m. to 8:00 p.m. at the Mohart Community Center. Formal presentations will be given at 5:30 and 7:30. The location is at 3200 Wayne Avenue, on Linwood Boulevard between The Paseo and 71 Hwy.

Sixteen additional public meetings will be held during March and April, at locations throughout the city.

For more information on light rail in Kansas City, see the KCATA’s light rail site and check out the KC Light Rail blog for daily news and updates.

See you there, Kansas City. Because it is up to us. Our leaders are really kinda worthless where light-rail is concerned, and if we don't kick their asses and turn out and let them know that we give a damn about this issue, they'll screw us over again just like they did when they decided to toss the results of an election just because they didn't like the way the teeming masses voted.

Well, that didn't quite go like I planned. Let's just say I know better than to take anyones advice on bus travel in this town. Always check the schedules yourself. There is no Max-28 connection at Crown Center between 3:15 and 6:55. I called the Metro call center and was told that the 28 I could catch downtown at the transit center would take me where I needed to go.

This was bad information.

But I was downtown, across the street from the central library, and I have a laptop, so I popped in and looked at the map. What a "Duh!" moment! I needed to take the Max to 31st street and take a 31st street bus to Wayne Ave. I was just checking schedules and times and my phone rang. My niece who works one block from the library where I was needed me to come get her car and run an urgent errand for her. I could feel her sigh with relief when I laughed out loud and told her where I was and why...

So short story long - I have no light rail information to impart.

But on the upside I got some fresh air and put some karma in the bank and got a gratitude fix that puffed me up to the point I was informed that I was being insufferable.
Posted by Blue Girl, Red State at 2/27/2008 02:39:00 PM