Sibel Edmonds calls out the FBI 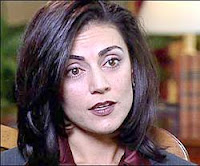 Where the hell is the American foreign policy press beat? (That's a rhetorical question. I know where they are - the useless idiots are wagging their cocktail weenies at Washington gatherings and hob-nobbing with the jackals they are supposed to be keeping in check...)

It is detestable that they have totally abdicated their responsibilities and completely ignored the allegations leveled by former FBI translator-turned-whistleblower Sibel Edmonds. I am not one to go rushing off in a big hurry to be one of the first to leap to a conclusion. I like independent corroboration. The thing is, Sibel Edmonds has it. An Inspector General even found that she was fired for being outspoken about, you know, how it's wrong for the State Department to trade in nuclear secrets with other countries - especially when they are less than concerned with US interests.

The woman is simply not playing the game the way our useless media prefers. She is not making it easy to dismiss her as a crackpot. God help 'em - there seems to be some "there" there, if you know what I mean. And the chattering classes are struck dumb.

Fortunately, there is the foreign press, and we have the internet...

One of the documents relating to the case was marked 203A-WF-210023. Last week, however, the FBI responded to a freedom of information request for a file of exactly the same number by claiming that it did not exist. But The Sunday Times has obtained a document signed by an FBI official showing the existence of the file. (emphasis added)

Edmonds believes the crucial file is being deliberately covered up by the FBI because its contents are explosive. She accuses the agency of an “outright lie”.

“I can tell you that that file and the operations it refers to did exist from 1996 to February 2002. The file refers to the counterintelligence programme that the Department of Justice has declared to be a state secret to protect sensitive diplomatic relations,” she said.

The freedom of information request had not been initiated by Edmonds. It was made quite separately by an American human rights group called the Liberty Coalition, acting on a tip-off it received from an anonymous correspondent.

The letter says: “You may wish to request pertinent audio tapes and documents under FOIA from the Department of Justice, FBI-HQ and the FBI Washington field office.”

It then makes a series of allegations about the contents of the file – many of which corroborate the information that Edmonds later made public.

Edmonds had told this newspaper that members of the Turkish political and diplomatic community in the US had been actively acquiring nuclear secrets. They often acted as a conduit, she said, for Inter-Services Intelligence (ISI), Pakistan’s spy agency, because they attracted less suspicion.

She claimed corrupt government officials helped the network, and venues such as the American-Turkish Council (ATC) in Washington were used as drop-off points.

The anonymous letter in the possession of the Sunday Times provides the name of a high-level government official who is alleged to have been secretly recorded speaking to a high Turkish official at the Turkish embassy in the last half of 2001. The letter maintains that the government official warned a Turkish member of the network that they should refuse dealings with a company called Brewster Jennings because it was a CIA front, working in counter proliferation. Remember Brewster Jennings? That was Valerie Plame's cover company. Where she battled to keep nukes out of the wrong hands, and put her life on the line to do so, until she was treasonously outed for political reasons. (And if we had a functioning press corps, that little tidbit right there, all by itself, would set them off like a pack of baying bloodhounds. But we have a bunch of complacent, utterly worthless lap-dogs instead. Sickening. Absolutely sickening...)
Edmonds, meantime is not giving up, in spite of being encumbered by numerous state secret gag-orders to prevent her from talking further about the investigations she provided translative services for, is not giving up. So she is beating the drum and repeating whats on the record and helping to connect the various and disparate dots as best she can within the confines of the strictures placed upon her. “I cannot discuss the details considering the gag orders,” she said, “but I reported all these activities to the US Congress, the inspector general of the justice department and the 9/11 commission. I told them all about what was contained in this case file number, which the FBI is now denying exists. This gag was invoked not to protect sensitive diplomatic relations but criminal activities involving US officials who were endangering US national security.” (emphasis mine)

I dunno about you, but I would rather see the press concentrate on this story than the hour-by-hour progress reports on Britney's most recent downward spiral.
Posted by Blue Girl, Red State at 1/20/2008 11:46:00 AM