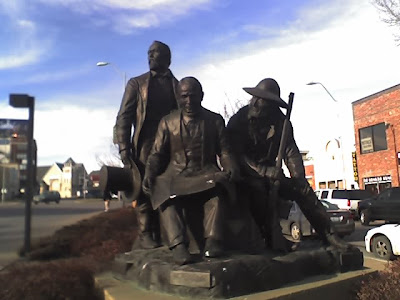 The Westport Statue on Broadway at Westport Road -
that's Alexander Majors, John Calvin McCoy and Jim Bridger -
the men who really opened up the western frontier - in heroic scale.

Some days you just have to go outside and play.

I never had a home town before, so now that I have adopted my husbands, I am really getting in to calling Kansas City home. A Brat could do a hell of a lot worse than to meet in college and marry a bootstrapping Airman from Westport (not Connecticut) and continue bouncing around for a couple of decades.

I had a tough time at first. Kansas City was like no place I have ever been. Pretty soon, it finally sunk in. That's what makes it so fucking cool.

This place has something for everyone. If you are a no-nonsense, common sense, loafers-and-sweater-vests, Volvo driving liberal, you live in the northland. If you are a Hispanic community activist, you can be found on the west side or at 18th and Central in KCK. If you are a neo-yuppie banker-type, you live on the Plaza or in the River Market area. If you are a hipster DINK couple, you live in an Urban Couer development loft in the Martini Corner area. If you are an effete Hummer-driving snob, well, we have Johnson County for people like you - although I have good friends over there fighting the good Democratic fight. If you are a lesbian or gay performance artist, you are gonna find a home in the Crossroads. Every kind of freak you can imagine - even Chiefs fans* - is welcomed with open arms in Westport, so long as they are not a danger to anyone else.

Part of me wants to be the biggest cheerleader for this place that the world has ever seen.

But then I remember this: I've been to Tokyo.

While I wish you all could share my good fortune, I gotta say, from a perfectly selfish position, and even though city officials probably disagree with me: Feel free to visit, but I think we are just about the perfect size.

Now, I'll go go catch up on what happened in the world in this 24/7 news cycle we live in while I was outside getting fresh air (Times Square!) (sorry - inside joke) and sunshine - and get back to work.

Hope your Saturday rocked, where ever you are.


(*I'm truly sorry, but I will forever be an outsider here. I. Just. Don't. Get. the adoration for a losing football team, and I never will, apparently. My husband has been trying to make me understand for almost 27 years, and I still fail to grasp it. I must be really awesome, because he still loves me in spite of this tragic personal failing. At least I have the decency to put this blasphemy in Red, so maybe I won't get pelted with overripe produce next time I stick my nose out the door.)
Posted by Blue Girl, Red State at 1/05/2008 04:15:00 PM