Saturday after noon the Hillary Clinton campaign headquarters held a grand opening in Kansas City. The doors opened at 10:00 a.m. and volunteers started phone banking, then at 2:30 a group of local and state elected officials who are endorsing Senator Clinton in her bid for the White House spoke to the standing-room-only crowd. 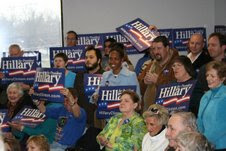 I arrived at the headquarters at about 2:00, with the local politicians who have endorsed the Senator scheduled to address the crowd at 2:30. State Senators Rachel Storch and Jolie Justus, Jackson County Executive Mike Sanders, and United States Congressman Emmanuel Cleaver. They were great speakers one and all - well-spoken, articulate in their expression of why they are supporting Senator Clinton - but Congressman Cleaver spoke last, and that man can move a mountain with his oratorical skills.

He had a lot of things to say, and much of it quotable - but one thing he said rings absolutely true...speaking about the Republicans and the concern-trolling of certain factions of the Democratic Party - "We are all Democrats. We can't let them separate us."

Amen, Mayor (Congress is only national) you got that right.