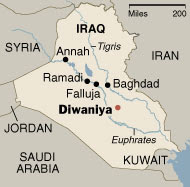 After two days of heavy fighting in Diwaniya, American airpower was called in to quell the violence.

Members of Muqtada al-Sadr's Mahdi Army (they are no longer abstaining from engaging Americans) have relocated to Diwaniya in recent weeks as the American troop presence has increased in Baghdad - because, well hey, the Americans can't be everywhere, now, can they?

The fighting started on Friday after American and Iraqi forces sealed off neighborhoods and started house-to-house searches, looking for members of the Mahdi Army. When such an operation results in two days of heavy fighting, it is quite obvious that all did not go swimmingly.

Iraqi police confirmed that seven rebel fighters were killed, fifteen more were wounded and dozens were arrested. No American casualties were reported.

I am disturbed by this stand-their-ground posture that Iraqi forces have been taking. A posture that seems to hold until airpower is called in, by the way.

I look at this through a different lens than most everyone else.

I see reason for caution. I see a resistance that is adapting and getting stronger.

I see the potential for a very, very bad day as American forces leave the hardened bases and spread out into the neighborhoods.

Thats not defeatism talking, that's realism talking. George aWol Bush is unwilling to deal with reality - and here is the real bitch of the whole deal - He isn't the one who has to deal with the reality of Iraq.

That unpleasant task is left to the 18-year-old rolling through Ramadi looking for IED's in a Hummer that may or may not have adequate armor. Oh, and the parents who bury him when Bush's grand scheme literally blows up in his face, of course.
Posted by Blue Girl, Red State at 4/08/2007 12:57:00 AM

And I see it as a good thing for uis when they decide to stand their ground and fight. Because that's when we kill them. (not PC phrasing but true)
and perhaps one of the reasons they are standing their ground and fighting more is because they have been driven out of their secure hiding places in Baghdad and are now among a less hospitable population so they have no choice but to fight. Which frankly is part of what the surge was supposed to do.
YOU keep right on looking at the negatives there and I will keeping seeing progress. Interesting how that works.....