It is going to be a hell of a day. That is my prediction. The blogs are restless and the cynically-timed release of the KSM confession did not knock Torture Boy off the front pages.

Of course, I lost faith in the confession when I got to the part about how he is the real father of Anna Nicoles baby, O.J. can stop looking for the real killers and he personally was behind the English crop circles and Barack Obama's parking tickets in Cambridge.

The trickle over the dam may well be a deluge by noon.

Have some Kitty Karma. 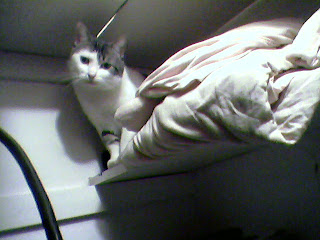 Buddy really likes the linen closet. After twice picking them up,
the sheets are no longer on that shelf. 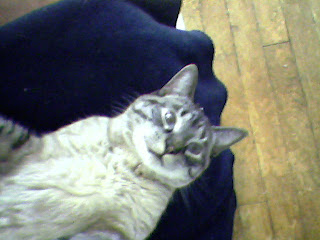 Charlie. In his natural state - sprawled out on his back,
showing me where his bits and pieces used to be. 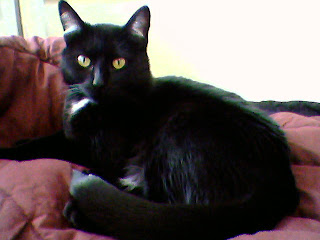 Phoebe still finds them wholly intolerable and refuses to be
in the same room with those other cats. 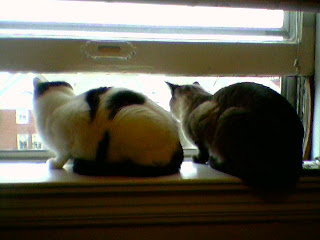 We had a few really nice spring days with the windows open.
The brothers have decided that the very best place to be in the entire house
is the window sill in my bedroom, right at bird-level.
Posted by Blue Girl, Red State at 3/16/2007 08:33:00 AM

Well you know I love your blog posts and I have to say I absolutely love the cat pics. They are funny, adorable, lovable, you name it, so thanks for putting in the cat stuff. I am so totally a pet person; Mr. mbg, too, only more so dogs than cats.

Cool pictures. The one with the boys in the window causes me to look over to my right, where Squirt (her formal name, we usually call her Maggot) is sitting in the open window. She does this any time I'm at the computer (including 20 degree mornings). I suppose I'm the idiot that opens it for her, though.