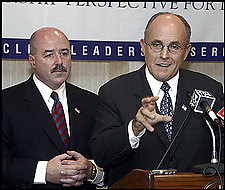 Back when Rudy & Bernie were Buds...

The gift that keeps on giving? With friends like these? Lie down with dogs?

Pick one. Rudy's close associations with scandal-ridden Bernard Kerik, who Rudy personally recommended to president Bush to fill the Homeland Security position in 2004 are in for a scrutinizin' in the face of Kerik's pending indictment on a whole slew of charges, ranging from tax evasion to conspiracy to commit wiretapping.

Let me be clear here - Guiliani is in no legal jeopardy and is implicated in no wrongdoing. But the political damage could be extensive.

The case against Kerik that federal prosecutors are preparing could generate uncomfortable political attention for Giuliani because it focuses on Kerik's activities while the two men were in government together and were jointly running Giuliani-Kerik, which was paid millions of dollars for advising upstart companies, doing federal work and consulting with clients overseas.

Even as Giuliani prepared to announce his presidential bid, his political team had identified as a political liability the man who had stood stoically by the mayor's side after the Sept. 11, 2001, attack on the World Trade Center, according to a strategy memo that surfaced in January.

Kerik's legal troubles could damage the law-and-order image that is the bedrock of Giuliani's campaign, said Republican political consultant Nelson Warfield, who is not aligned with any 2008 candidate. "Kerik has potential to undermine his image as a competent leader and someone best fit to fight terrorism," Warfield said. "Either he had fundamentally bad information about Kerik, or he was reckless in not knowing enough about a man who was that close to him." (emphasis added)

Either way, it just isn't very presidential, know what I mean? And any whiff of corruption and cronyism is a great big old red flag in the wake of the most corrupt, crony-driven administration ever.