Michelle Obama came to Kansas City today to hold a round-table discussion and talk with working women about economic (in)security. The panel consisted of Mrs. Obama and five area women who are struggling with this republican-caused disaster of an economy, and she took questions from the audience after. Every time an audience member gave back the microphone, so many hands shot into the air that had she answered them all, we would still be there, and I am getting to this seven hours later.

Wow. What an engaged and engaging speaker. She is smart, funny, quick-witted and savvy. She is impressive in her own right, and Senator Obama is a lucky man to have woman like her as his partner. I think she will be a terrific first lady who will use her position to bring attention to vital domestic issues. She could do a lot simply by doing what she did today, all over the country, for the first two years of her husbands administration.

The doors opened at 9:00 for the 10:00 event, and it was pretty cool to sit over in the press pen and watch as the mostly-female crowd filled the room in minutes. 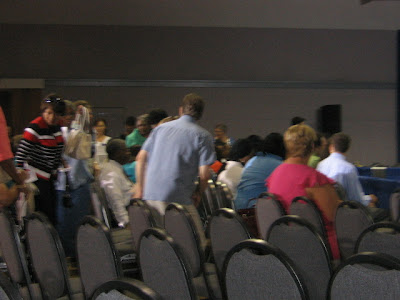 The time lapse between these two pictures was about three or four minutes. 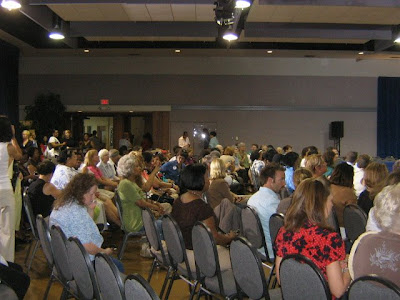 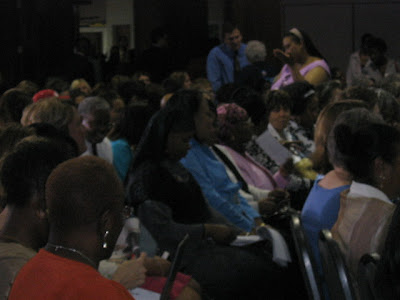 And this one was taken about ten minutes before the program got started. 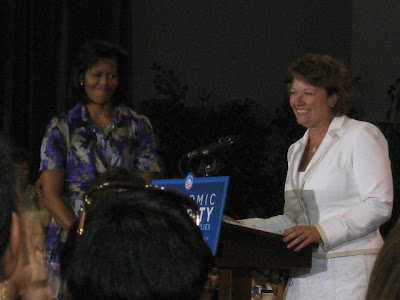 The event started on time, and Mrs. Obama was introduced by Missouri State Auditor Susan Montee, who was one of the first of Missouri's Democratic elected officials to get behind Obama - She endorsed him one year ago today. 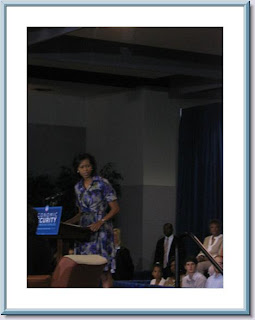 Mrs. Obama spoke for about fifteen minutes, then the panel discussion got underway with five area women who are all playing the game by the rules and falling behind. She spoke about her early life, growing up in a working-class environment, her father worked for the city and her mother raised Michelle and her brother. And today, a man like her father can't keep up and can't make ends meet on one salary.

She also talked about her husbands early years and his mothers struggles to complete her education and the fact that she had to rely on food stamps at times to put food on the table for Barack and his sister. She tells us that her husband understands the struggles of women, and the way she tells it, I believe her. His grandmother, now in her eighties, was a pioneer. She was the primary breadwinner in their home, starting her career as a secretary in a bank and working her way up to a senior executive position - and heard the thud when she hit the glass ceiling. He understands what women deal with because he has spent his entire life in the company of strong women who dealt. 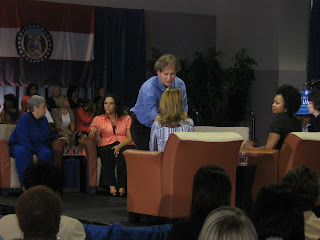 After her prepared remarks,she took a seat with the roundtable panel. The participants were, going clockwise clockwise, Sister Berta of Operation Breakthrough (no serious conversation about poverty takes place in this town without her input), next to Sister Berta is Michelle Vitale. Following on around, that is Leanna Templeton at the right edge of the frame, and seated next to her is Sheila Johnson. Next to Ms. Johnson , being miked up in this picture, is Rebecca who didn't give her last name.

Each and every one of these women has a compelling story, and frankly I will more than likely come back to the well once more on this and get into the details of the conversation and the specific struggles of the women on the panel and the people in the audience. 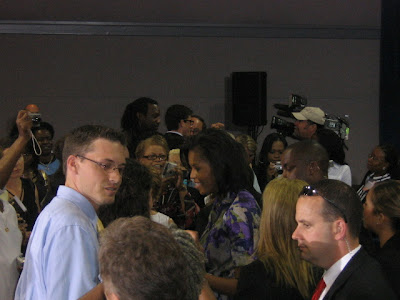 She worked the rope-line for quite a long tiome, taking the time to stop and speak with everyone who waited patiently. I think at least as many people got hugs as handshakes, and the Secret Service guys almost seemed chagrined that she is so intent on interacting so intimately with the crowds.

***************
Yes, I am back on-line. I picked up the computer this afternoon but I had to spend several hours reinstalling software and reactivating installed copies. Regular blogging resumes tomorrow.

Thanks for the patience - and the help with the trip. I was telling Warren just yesterday that we have the best readers in the entire blogosphere. We are your fans, too.