When I opened my New York Times this morning and saw the headline that Obama is taking the offensive, and challenging McCain in traditional republican areas, I did the happy dance! Barack Obama is openly embracing the 50 State Strategy and spurning the cynical DLC model of falling back on traditional liberal enclaves and writing us off out here in the middle.

It's a glorious day! It is a day that this red-state riffraff has been waiting for with bated breath since the day John Kerry punked us in October 2004 and sealed our fate to suffer four years of Blunt-force trauma at the hands of a couple of juvenile brats posing as a governor and his lobbyist brother.

Some of us have been pissed off at Rahm Emanuel and the DLC limousine liberals ever since.

Dr. Dean resonates with us because he listens to our concerns and treats Missouri like our eleven electoral votes matter - because in 2000, they sure as hell did. In 2000, aWol took this swing state by a mere 80,000 votes, and if he hadn't, our votes would have swung the electoral equation to Gore, even without Florida, and spared the entire world the abortion of government that has been the bu$h administration.

So yeah, we matter, god-damnit. Not only that, we have traditional Democratic roots that predate the founding of the state! Yes! There were Democrats in Missouri before there was a Missouri! The Missouri Democratic Party is the oldest continually-operating political party west of the Mississippi River, and the wingnuts only seized the state lege in 2000 (thanks to term limits, which have been a monumental disaster for the state).

Given the past eight years, and the indignities this president and the party he poisoned have heaped upon this nation - all of us, not just blue-state Americans - are pissed off and ready to put up a fight. I want a champion, someone who will throw down the gauntlet and challenge the conventional wisdom. Someone who will take the fight to them in every state and keep them on the defensive. While they are still scrambling to explain the latest lobby-gate revelation (Lindsey Graham didn't even try this morning, he just mouthed platitudes) Obama is hiring the mastermind behind Hillary Clinton's Ohio win and setting up the chessboard to take the state, and with it McCain's queen.

Mr. Obama has moved in recent days to transform his primary organization into a general election machine, hiring staff members, sending organizers into important states and preparing a television advertisement campaign to present his views and his biography to millions of Americans who followed the primaries from a distance.

In one telling example, he is moving to hire Aaron Pickrell, the chief political strategist of Gov. Ted Strickland of Ohio — who helped steer Mrs. Clinton to victory in that state’s primary — to run his effort against Mr. McCain there. In another, aides said, he has tapped Dan Carroll, an opposition researcher who gained fame digging up information on opponents’ records for Bill Clinton in 1992, to help gather information about Mr. McCain. That is the latest evidence that, for all the talk on both sides about a new kind of politics, the general election campaign is likely to be bloody.

Mr. Obama’s campaign is considering hiring Patti Solis Doyle, a longtime associate of Mrs. Clinton who was her campaign manager until a shake-up in February, the first of what Mr. Obama’s aides said would be a number of hires from the Clinton campaign. 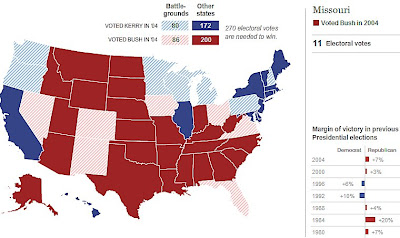 [I have made the map clickable to the interactive NYT site ~~BG]
I don't pretend to be an expert or anything, but I do have a working knowledge of Missouri history, and how that history dovetails with the politics of the state.

For instance, I know that no Democrat has won the White House without carrying Missouri since the 1850s. In fact, this state has only gone to the loser once in the last century - when our grandparents voted for Stevenson over the sitting President Eisenhower in 1956. Not exactly a traditional republican stronghold, are we?

In fact, I think if the New York Times had done a bit more research they would have made Missouri a battleground state leaning red instead of reliably republican on that map. Look at the primary results from the Secretary of States office: 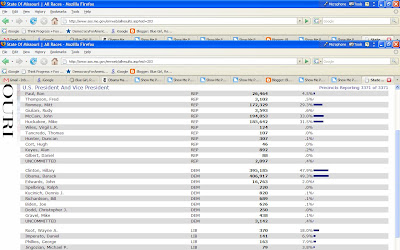 [Image is clickable to the SoS results page]
If you do the math, you see that of over 1.4 million ballots cast in Missouri on Super Tuesday, 58.27% were Democratic ballots. McCain and Obama both won the state, but the numbers paint a bleak landscape for the McCain camp. McCain won 33% of the republican vote, with a raw vote tally of 194,053. Both Democratic frontrunners garnered more than double the votes McCain was able to muster.

Then there is the latest Rasmussen Missouri poll, which shows Obama a one-point favorite (43% to 42%, with 15% choosing "other" (9%)or "not sure" (6%). You can look at the poll here, and see just how out of step McCain is with the concerns of Missouri voters.

And worse for him still are the 31.5% of republicans in this state who voted for Mike Huckabee. With over 185,000 republican ballots cast for Huckabee, that is a lot of republicans that might opt to sit on their hands this November and skip the presidential race. Remember, 80,000 votes in 2000 made the difference. With the mobilization Obama has mustered, it won't take too many aggrieved Missouri conservatives opting to vote for Bob Barr, skip the race at the top of the ticket and only vote in the state and local races, or simply go fishing on election day to have an impact which color the photoshop wizards use to color Missouri on the map the night of November 4.

This is one red-state Democrat that is fired up and ready to go, and has been since January 1995, when the Contract on America was executed, and I have been absolutely spoilin' for a bare-knuckled brawl since the supremes selected in December 2000.

This is the political season I have been waiting for my entire life. It is high time the Democrats came out swingin' - and hot-damn if we don't have someone this season with a hell of a reach.