Bad weather moves through the area: Thunderstorms and tornadoes tore across the nation's heartland Saturday evening, killing at least 11 people, mangling buildings and trapping people in rubble in areas still reeling from other recent bouts with severe weather. A twister killed at least six people in the northeastern Oklahoma town of Picher, then skipped over the Missouri state line to wreak further death and destruction, authorities said. The death toll in Oklahoma could climb, said state Emergency Management spokeswoman Michelann Ooten. The Picher tornado caused major damage in a 20-block area, she said.

Lebanon's government moves to counter Hezbollah: Lebanese security and hospital officials say that at least 12 gunmen are dead and 20 wounded in a gun battle between pro- and anti-government groups in a remote region of northern Lebanon. Saturday's gun battle occurred in the town of Halba in Akkar, a remote Sunni region in northernmost Lebanon when fighters loyal to Sunni leader Saad Hariri and the government clashed with members of the Syrian Social Nationalist Party, a secular pro-Syrian group allied with the Shiite Hezbollah. The pro-government fighters stormed the office of the SSNP and set it ablaze after the gun battle. The number raises to 37 the death toll since Shiite-Sunni sectarian violence erupted in Beirut on Wednesday and spread to other regions - the worst sectarian bloodshed since the 1978-90 civil war that killed 150,000 people and left Beirut divided along religious lines. Meanwhile, Hezbollah TV says that Hezbollah-led opposition forces will withdraw all their gunmen from Beirut in compliance with an army request.

Myanmar attempts to hold referendum: Myanmar's military rulers held elections aimed at solidifying their hold on power, while brazenly turning cyclone relief efforts into a propaganda campaign. In some cases, generals' names were scribbled onto boxes of foreign aid before being distributed. Human rights organizations and dissident groups have bitterly accused the junta of neglecting disaster victims in going ahead with Saturday's referendum, which seeks public approval of a new constitution. Critics describe it as a sham.

Zimbabwe tries again: Zimbabwean opposition leader Morgan Tsvangirai says he will return to his homeland - despite threats to his life - to take part in a presidential runoff against President Robert Mugabe that could defeat the longtime "dictator." Tsvangirai, addressing reporters in the South African capital, said his supporters would feel "betrayed" if he did not face Zimbabwe's ruler of 28 years in the runoff. "A runoff election could finally knock out the dictator for good," he said. "I am ready and the people are ready for the final round." Tsvangirai said he would return to Zimbabwe to begin a "victory tour" shortly. No date has been set but aides said Tsvangirai would return in the next two days.

McCain struggles to raise money: Senator John McCain, the presumptive Republican nominee, is struggling to attract money from some of the same industries that helped bankroll President George W. Bush's record-setting fundraising. Employees from the securities, construction, pharmaceutical and energy industries, who accounted for about a tenth of Bush's money in 2004, are turned off by his record and giving more to his Democratic rivals, Senators Hillary Clinton and Barack Obama. ``A significant percentage of your base Republican support, whether financial or otherwise, are not fans of McCain because of various things he's done or said or sponsored,'' said Republican consultant Eddie Mahe, who is supporting the Arizona senator. ``Many of them don't see Mr. McCain as being a lot better'' than the Democrats. Obama and Clinton each raised close to $11 million from the four industries through the end of March, compared with $6 million for McCain. In 2004, Bush raised three times more money from those sources than Senator John Kerry, the Democratic nominee that year.

Another impact of the subprime mortgage crisis--abandoned swimming pools: 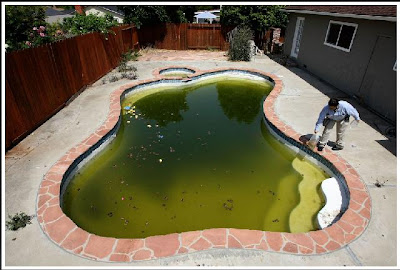 High fuel prices hurt FedEx and UPS: FedEx Corp., the second-largest U.S. package-shipping company, said fourth-quarter profit will miss its forecast after surging fuel prices raised costs by at least $100 million more than estimated. The shares fell 3.3 percent after the Memphis, Tennessee-based company said the slower U.S. economy is curbing express and freight shipments. Yesterday's forecast marked the second time FedEx pared its outlook this fiscal year under the strain of the rising price of oil, which set records each day this week, and a possible U.S. recession. United Parcel Service Inc., the largest U.S. shipper, last month lowered its forecast as well. ``This was right about the same magnitude as UPS's announcement,'' analyst Dan Ortwerth of Edward Jones & Co. in St. Louis said in an interview. ``The whole fuel situation is really a moving target. Everybody's all over the map on what to expect.'' UPS fell 1.2 percent after regular trading to $69.41, following a 78-cent drop to $70.29 in composite trading.

China contracts with Venezuela to secure supply of oil: Venezuela agreed with China, the world's fastest-growing major economy, to form a joint venture that will produce oil in Venezuela's Orinoco Belt to supply a new 400,000 barrel-a-day refinery they will build in China. The venture between Petroleos de Venezuela SA and China National Petroleum Corp. will pump oil from an area called Junin 4, where CNPC has quantified reserves, President Hugo Chavez said at a signing ceremony in Caracas late yesterday. China is securing long-term energy supply deals around the world to satisfy its growing needs. Chinese oil consumption will rise 5.3 percent this year, the International Energy Agency said Jan. 16. Demand rose 6.6 percent in 2006, according to the most recent BP Statistical Review.
Posted by Guest Blogger at 5/10/2008 11:45:00 PM