And you thought that certifying the embassy in Iraq was the last we would hear of that fiasco! 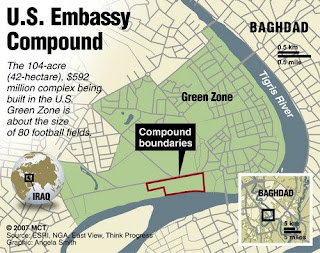 When the State Department asked for bids for the new mega-bunker embassy in Iraq, exactly one came pouring in. It was from J. A. Jones International of Charlotte, North Carolina.

The company has a solid track record with the State Department, having constructed the embassies in Belize and Athens. Both of those projects were brought in on time and close to budget.

In spite of the fact that the company has performed satisfactorily in the past, and that the company submitted the only bid, the State Department rejected the bid because it was for twice what State wanted to spend, and the company would not guarantee that the facility would be complete by June 2007. Additionally, the J.A. Jones bid was a cost-plus estimate, which frankly, is about the only way a responsible contractor would have bid the job, since the construction site was in a freakin' war zone...that was getting hotter every day. First Kuwaiti was chosen solely because it was willing to offer a fixed-price contract, in which cost overruns aren't supposed to be passed on to the government.

Unable to get a legitimate contractor to walk down the primrose path to potential financial ruin, the State Department Bureau of Overseas Building Operations (OBO) waived the law requiring open and competitive bidding, and awarded the contract to a firm from Kuwait, First Kuwaiti General Trading & Contracting Company. When the OBO issued the waiver, they described First Kuwaiti as "capable of completing the design and construction in accordance with the required schedule, budget and performance parameters."

That rosy assessment and vote of confidence was, to say the least, overblown. The project has been plagued by scandals of using counterfeit and shoddy building materials and slave labor. Ten months after the embassy was supposed to be ready to open, it is still not ready.

Now, on top of everything else, we learn that the facility has insufficient living quarters.

The new U.S. Embassy complex does not have enough fortified living quarters for hundreds of diplomats and other workers, who must remain temporarily in trailers without special rooftop protection against mortars and rockets, government officials have told The Associated Press.

Sorting out the housing crunch and funding could further delay moving all personnel into the compound until next year and exposes shortcomings in the planning for America's more than $700 million diplomatic hub in Iraq.

The issue of "hardened" housing in the U.S.-protected Green Zone has gained renewed prominence since Shiite militias resumed steady attacks on the enclave in late March as part of backlash to an Iraqi-led crackdown.

More than a dozen people have been killed in the Green Zone in the latest waves of attacks, including a U.S. civilian government worker whose housing trailer was hit.

At one point — during the heaviest barrages early this month — the State Department ordered all its Baghdad employees to wear body armor and other protective gear while outside buildings in the Green Zone, which also contains the British Embassy, key Iraqi government offices and other international compounds.

Staffers also were ordered not to sleep in their trailers, and hundreds of cots were placed inside the current embassy — a former Saddam Hussein palace.

The facility was finally certified this month, after myriad problems had been identified and corrected, and McClatchy reported at the time that the move-in could start as early as next month.
Well...not so fast...

There is inadequate hardened housing. Let's just recap what that means and why it is so...

After the fact, it was decided that the coalition headquarters would come to the embassy, too. State official Patrick Kennedy said that decision was made because "Crocker and Petraeus don't want to divorce."

In addition to the military command, there are aid workers who will be moved into the embassy that accommodations were never planned for.

But of course, this plays hell with the living quarters situation, and according to Patrick Kennedy, there is now inadequate hardened housing for hundreds of people, and flimsy trailers are lined up behind the compound, awaiting a hardened canopy and occupancy; and plans are underway to divide the apartments in the embassy into smaller but more numerous units.

When I read this yesterday, I thought "Hmmm. I wonder if the naysayers who poo-pooed the foreign service personnel who protested forced postings to Iraq, maintaining that service there was a potential death sentence still think they are just being histrionic?"